The national universities in the three prefectures of the Hokuriku region of Japan (Kanazawa University, University of Toyama, University of Fukui, and the Japan Advanced Institute of Science and Technology [JAIST]) have built and put into operation a remote learning system with interactive connections between each of the universities. In order to learn more about the aims of the system and its successes, we talked with Professor Ichiro Tanaka of the Graduate School of Natural Science and Technology, Kanazawa University, who chairs the special committee on student education of the Union of National Universities in the Hokuriku Region.(Interview date: September 30, 2008)

At Kanazawa University and the other national universities in the Hokuriku region, you appear to be making various efforts to deepen the ties among each university.

Tanaka: For some time we have been holding conferences attended by the presidents of Kanazawa University, and the Universities of Toyama and Fukui. We have been furthering ties not only in research fields, but also in such areas as sharing the services of part-time instructors across our universities. In 2004 we established the Union of National Universities in the Hokuriku Region toward deepening this cooperation. In this Union we have set up various special committees, and are working to improve the education and research infrastructure, build closer ties within the region, and make our administration more efficient, among other things.

What led you to launch a project for building the interactive remote learning system?

Tanaka: Each of the universities had already been actively pursuing cooperation in such areas as sharing part-time instructors and exchanging credits, but we were having trouble making these programs function properly due to distance and other obstacles. Even though we are in the same Hokuriku area, traveling from one university to another takes considerable time. It’s no easy matter for students to go to another university to take a lecture, and for the part-time instructors it meant spending an entire day for just one lecture.

When we were searching for a way to solve these problems, the idea of building an interactive remote learning system arose as a potential solution. Using a network for remote learning would overcome the distance problem, and would let us make effective use of the personnel and the research and educational resources in each university.

What were the concepts that you tried to follow in implementing this project?

Tanaka: The first was to make it interactive in the true sense. It was important, in other words, to enable the students on the receiving end of remote lectures to take part in the classes right alongside the instructors and students on the sending end. We could have used a simple videoconferencing system if all we wanted was to deliver the contents of lectures. With that approach, however, the students on the receiving end could easily feel they were just watching television, while the instructor on the sending end, with just a little monitor on the lectern or desk, would not have a feeling of being in the same classroom as the remote students. So in designing this system, we wanted to overcome those problems.

Another important point was to avoid making the system hard to operate for the faculty members using it. The resulting system is made up of advanced equipment with sophisticated functions, but we were not doing this just for the sake of the bells and whistles [laughter]. Even if the instructor doing a remote learning session is not big on technology, we wanted to make it possible to proceed pretty much like in the usual teaching experience, without having to worry about system operation. This was a major goal of the project. 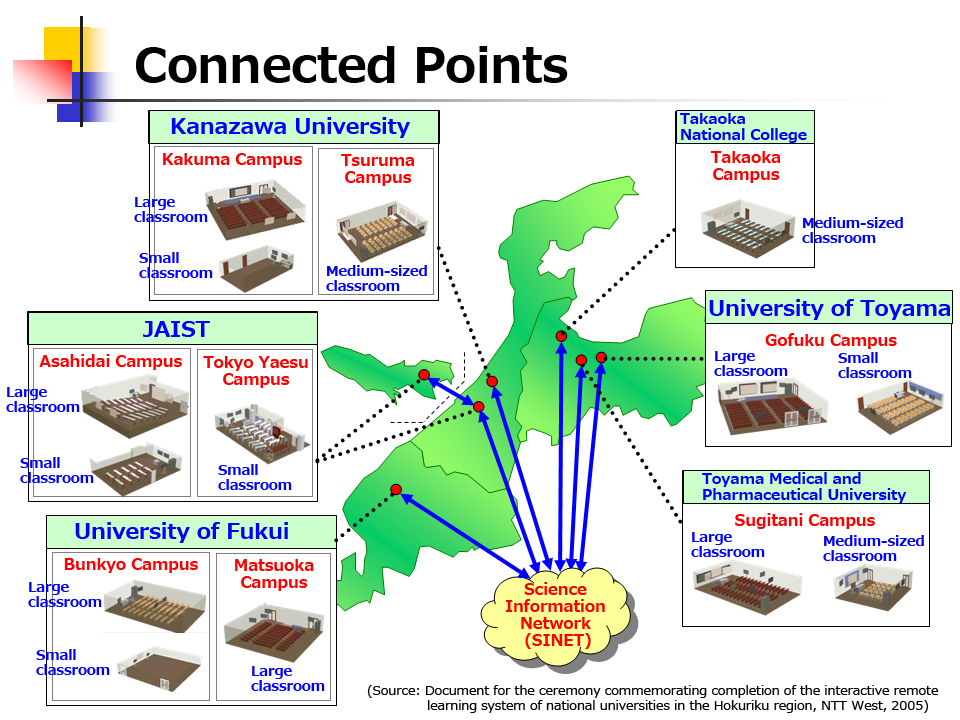 Can you tell us about the features of the system?

Tanaka: The system incorporates many innovative features for realizing the concepts I have described. In medium-sized or large classrooms, for example, there are two large screens in the back of the room showing the students taking the class at the other university. When students look behind them, they can see the remote classroom students sitting behind them looking at the same lectern as they are. By readying this kind of environment, a sense of being together in a single classroom is created. What’s more, since the system is linked to the attendance management system, which uses student ID cards, the lecturer can call on students shown on the screen in the remote classroom and ask them questions. Both the students in the local classroom and those in the remote location can take the class just as in a regular classroom setting.

The remote classroom is also equipped with two or three monitors, for viewing the instructor, the blackboard, and teaching materials. The instructor camera, by the way, is the auto-tracking type, so there’s no need to worry about going off the screen when the instructor moves around in front of the blackboard. And when the system is reserved ahead of time, it starts up automatically when the time comes. The instructor does not have to perform any system operations before the lecture starts.

Were there any network issues you had to deal with?

Tanaka: The biggest problem, as expected, was voice delay. Actual tests show that people are bothered by a 0.5 second gap between images and sound. Since that would prove too distracting for effective learning to take place, we set a goal of reducing this gap to 0.2 seconds or less. That required a faster network environment, so we asked the NII to increase the SINET bandwidth. They readily agreed to our request, for which we are most grateful.

How are you making use of remote learning now?

Tanaka: In the curriculum for the 2008 academic year, we are using remote learning for four courses in the first semester and 13 in the second semester. Most of these are liberal arts courses, but there are also some specialized subjects being taught in this way. Remote learning is being used not only between separate universities but also linking multiple campuses of the same school. Judging from questionnaire results, the system is being well received. A faculty member writes, “It’s interesting to see a different group of people than ordinarily.” A student says, “It is meaningful to mix with students of other universities,” while another says, “I like that we can attend highly interesting lectures of other universities right from our own school.”

Initially because of the difference in class times of each university, we timed the remote learning with the school having the latest starting time for the final fifth period. Now, however, with the agreement of the presidents of each school, the time periods of Kanazawa, Toyama, and Fukui universities are all the same, enabling use to have remote classes right from the first period.

Looking ahead, how do you intend to expand on the remote learning program?

Tanaka: I expect that sharing and using the research and educational materials each university has built up will become increasingly common. The system should become a powerful tool for this purpose. In liberal arts studies, for example, no matter which of the national universities in the Hokuriku area students enter, they will be able to obtain the same level of teaching. Students will be able to gain a feeling of satisfaction for having come to a Hokuriku national university. We want to continue building up the environment. Naturally that will require attention to all the network issues like security, speed, and reliability, for which we are pinning big hopes on SINET service and NII support.