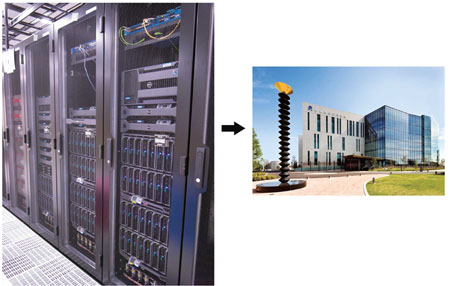 RIKEN and Japan Synchrotron Radiation Research Institute (JASRI) opened an X-ray free electron laser (XFEL) facility, SACLA, to shared use in March 2012. We spoke with Takaki Hatsui, the leader of the Data Acquisition Team in the Beam Line Research and Development Group of the XFEL Research and Development Division at the RIKEN SPring-8 Center; Yasumasa Joti, in the XFEL Division of, JASRI; and Takashi Sugimoto and Ko Mayama in the Control and Computing Division of JASRI, who described the outline of the operation and the role SINET plays.
(Interview date: June 15, 2012, English translation by NII.)

We understand that SACLA is a research facility using X-ray lasers.
Can you give us a brief description and explain its principles?

Hatsui： First of all, X-rays have much shorter wavelengths than visible light. They are used to study the fine structures of substances. At SPring-8, a synchrotron radiation facility next to SACLA, many different studies are underway using one of the strongest X-ray sources in the world. However, conventional X-rays at synchrotron radiation facilities are irregular in terms of light waves, or phases, which prevents us from investigating the ultra-fast dynamics of atoms and molecules. An effective solution to this problem is a laser, which is well known for reading and writing data on CDs and DVDs. A laser has a feature called coherence, which means its light waves are well correlated. It is expected to produce great effects as a light source for research purposes. However, lasers are a technology developed in the domain of visible light, and at first there were no lasers with the wavelength of X-rays. If we could create a light that had the characteristics of both X-rays and lasers, it would allow us to observe atomic and molecular movements that used to be invisible. That’s why research on X-ray lasers is being conducted around the world.

Hatsui: With the XFEL technology, an accelerator is used to increase the speed of the electron beams generated from an electron gun to near-light speed. Then the beams are sent through a device called an undulator, which uses a large number of aligned magnets, to produce a powerful X-ray laser. In fact, the process up until X-ray generation is identical in principle with the SPring-8, but it is very challenging to make it into an X-ray laser with perfect coherence. It was necessary to solve many different technical problems in the areas of electron guns, accelerators, and undulators. At SACLA, experts in different disciplines tackled these problems, based on their experience with the SPring-8. As a result, they succeeded in inventing a thermionic electron gun, which generates an extremely narrow electron beam; a C-band accelerator, featuring an acceleration capability twice as fast as existing accelerators; and an in-vacuum undulator, in which a large number of magnets are placed in a vacuum duct to create an ultra-strong short-period magnetic field. While overseas XFEL facilities have a total length of 2–3 km, we have achieved a compact design with a length of only 700 meters. This idea has been adopted in Switzerland and other countries. We think it will become a future standard.

The XFEL facility was the result of Japan’s science and technology capabilities.
In what specific fields is it used for research?

Joti： A good example is the structural analysis of proteins and many other substances. If we can clarify the microscopic structures of molecules and reaction processes, it is capable of elucidating unknown principles for different phenomena. Not only in the biological and pharmaceutical fields—it is also expected to produce good results in the material sciences, electronics, and many other fields.
By the way, no protein structure could be determined at atomic resolution previously, without crystallization. However, crystal preparation of a biomolecule itself was such a difficult task that this alone constituted a single research subject. Now, however, coherent X-ray allows a computer to act like a lens to allow the analysis of molecular structures so protein crystallization would not be necessary. In addition, an ultra-short pulse of XFEL, on the order of a few tenths of a femtosecond (one-quadrillionth of a second) has been achieved at SACLA. This allows us to observe chemical reactions as if we were watching a video in frame-by-frame advance mode.

Joti: But it is hardly problem free. High-resolution visualization of an atom or molecule requires a huge amount of data output from SACLA. X-ray diffraction from a substance is measured using a two-dimensional image sensor. While a protein crystallographic experiment at SPring-8 outputs roughly hundreds of images in a single experiment,
SACLA outputs one million to ten million images. This results in a tremendously larger data size. SACLA’s potential can’t be fully utilized without the high-performance computing technology to process this enormous volume of data. So we are moving ahead with the collaboration using the K computer, which is one of world’s fastest supercomputers.

And SINET is the network that connects the K computer and SACLA, correct?

Hatsui： Another challenge is that many of the SACLA experiments demand prompt verification of large volumes of data, unlike conventional X-ray studies. In the conventional approach, all data coming from the system are monitored by simple methods. With SACLA, some of the studies demand supercomputers as fast as the K Computer for online data analysis to see if the experiment is actually progressing well while going through the steps. Therefore, it is necessary for SACLA to be closely connected to the K Computer, as if they were integrated into one system. SINET plays this key role.

SINET has a very important assignment.

Sugimoto： Yes, but SINET does its job very well. The bandwidth necessary for the initial experiment with SACLA was estimated at 4 Gbps, and the transfer test conducted in February secured an average bandwidth of 6.4 Gbps. It is wonderful that it has performed even better than we expected without any special adjustments, as we expected there might be many connections from different universities.

Mayama： As I handle network nodes, I appreciate SINET, as it consistently provides a stable networking environment. SINET is vital to this facility and other institutions using high-capacity data that supports research activities and I hope it will develop further. Recently, we have been considering using the cloud as our IT infrastructure. I hope SINET will be useful in enhancing user convenience in situations like this.

Lastly, please tell us what your resolution is for the future.

Joti： SACLA will pave the way for research that uses unprecedented data volumes. We understand that we will need to provide a user-friendly research infrastructure, and we will strive to meet this goal.

Sugimoto： In future X-ray studies, computers will play a crucial role in the data analysis. IT infrastructure will be more important than ever before. We will work to build a solid environment.

Hatsui： SACLA has commenced user operation in 2012. Now we see rapid strides in X-ray research every month. Science at SACLA demands a high level of overall capabilities, including science and technology infrastructure. We will achieve positive outcomes by actively cooperating with experts in a wide range of fields. We expect data volumes to sharply increase in the future. We appreciate the SINET contribution to the field of networking to date, and we look forward to its continued contribution in the future.