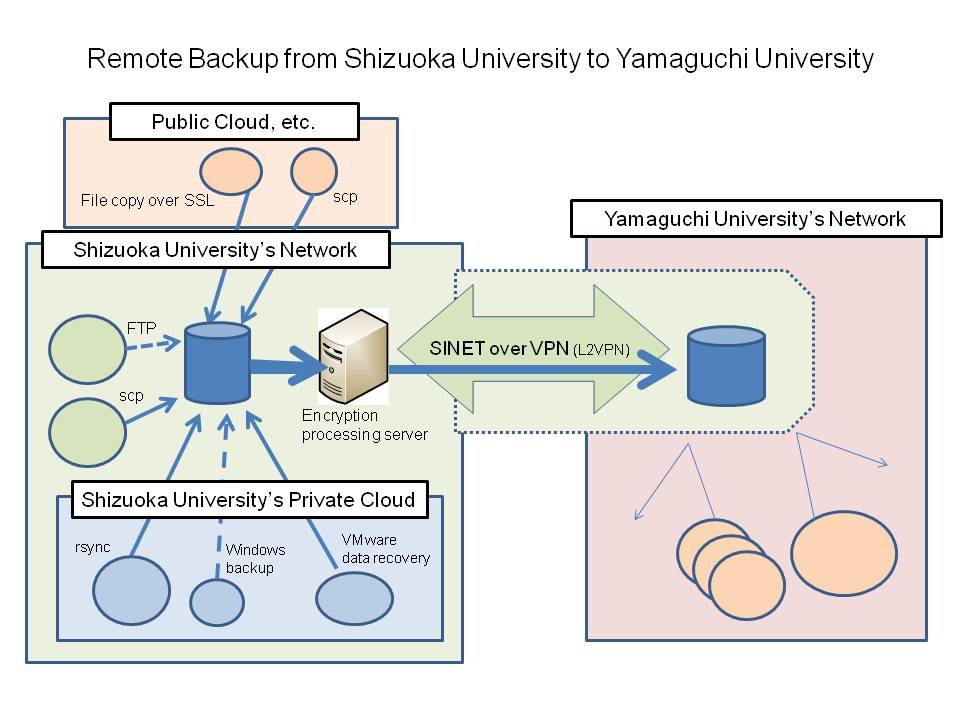 Shizuoka University is known as the first university to take up the challenge of creating a university cloud.
Can you give us the background?

Hasegawa： While we had built and had been operating the university’s IT infrastructure for a long time, several issues had come up, such as cost cutting, improving security, reducing environmental impact, and business continuity planning (BCP). Usually, actions are taken in individual areas, but this approach has unavoidable limits. For a significant improvement, it is a good idea to solve various issues through a comprehensive solution. So we focused on cloud technology. The virtualization and high-density accumulation of servers in the university would lead to an effective use of IT resources and cut costs. If it were placed at a data center outside the university, power consumption on campus would be massively reduced. Furthermore, our university faces the key challenge of preparing for a Tokai earthquake. So we thought that this would be greatly beneficial to enhancing BCP.

Tell us about past developments and achievements.

Hasegawa: Shizuoka University had long had a 10-Gbps private line that linked the Hamamatsu Campus and the Shizuoka Campus. As our cloud infrastructure we adopted a private-sector data center that had just been launched in Yaizu, which is located between the two campuses. In March 2010, we started offering a public cloud service for education and research purposes. If a teacher or student wants to use a server, this public cloud will quickly provide the necessary resources. Users don’t have to build or manage servers on their own any more. A secure environment has been created. In August 2011, we put a private cloud into operation that incorporated administrative systems. Basically, we have a policy of not having any servers on the university’s premises. This helps to dramatically reduce electric power costs on the two campuses.

You also recently launched a remote backup of mission-critical systems in tandem with Yamaguchi University.
What was behind this move?

Hasegawa: The data center is a very robust facility, and the rack accommodating the servers is in a location with a low risk of inundation, at an approximate altitude of 30 meters. By placing our university’s systems in this data center, we meet BCP requirements to some extent. However, some people in the university expressed concern about concentrating systems and data storage in a single location. To further enhance our ongoing preparations, we have begun building a remote backup system.

Why did you choose Yamaguchi University as your data backup site?

What systems and data will be backed up using the remote backup system?

Iguchi： The remote backup will cover most of the mission-critical systems that support the management of the university, including fee management systems, and groupware. The total data capacity of all these systems is around 3TB.

That is a huge volume. How is this enormous amount of data transmitted to Yamaguchi University?

Iguchi：The data center also takes local backups from individual systems on a regular basis, and the backup data are forwarded to Yamaguchi University via SINET. Individual operational systems are virtualized using VMware. Their complete virtual machine images are sent to the remote location. Of course, backup frequency and the data subject to backup vary depending on the level of importance of each system. So, 3TB of data isn’t transferred every day.

Did you introduce any innovations or ideas to the construction of the remote backup system?

Iguchi：For security reasons, the backup data in the system are encrypted. However, VMware doesn’t support directly saving data to an encrypted disk. So we created a system where data are transferred to the backup server at our university first before being encrypted and backed up.

Iguchi: It was a big challenge to secure the bandwidth necessary for a high-capacity data transfer as well as to ensure security. High quality and reliability are essential to continually transfer a large volume of backup data. It is also necessary to ensure the security of the communication route. When we were studying different approaches, Yamaguchi University’s Media and Information Technology Center suggested the SINET L2VPN service. That allows us to use a 1-Gbps bandwidth exclusively for backup, and poses no security issues.

The SINET L2VPN service has proven to be helpful as a mechanism for protecting important data at the university.

Hasegawa: That’s right. In the future, there will be more initiatives for inter-university remote and mutual backup. If we used a line provided by a private sector operator as infrastructure, we would incur a huge cost. In contrast, the SINET L2VPN service ensures the safety and security of information assets without placing a heavy cost burden on us. I think SINET has a large role to play not only in cutting-edge studies that use a large volume of data, but also in areas such as those our project is concerned with.

Finally, tell us about your future prospects.

Hasegawa: For this project, we worked on the remote backup of mission-critical operational systems. In the future, we aspire to expand this mechanism to educational and research systems and other operational systems. In particular, our university has set a future target of permanently managing the data for all those concerned with the university. We will work to create an infrastructure for secure long-term data storage. We look forward to SINET’s future development and improved service.