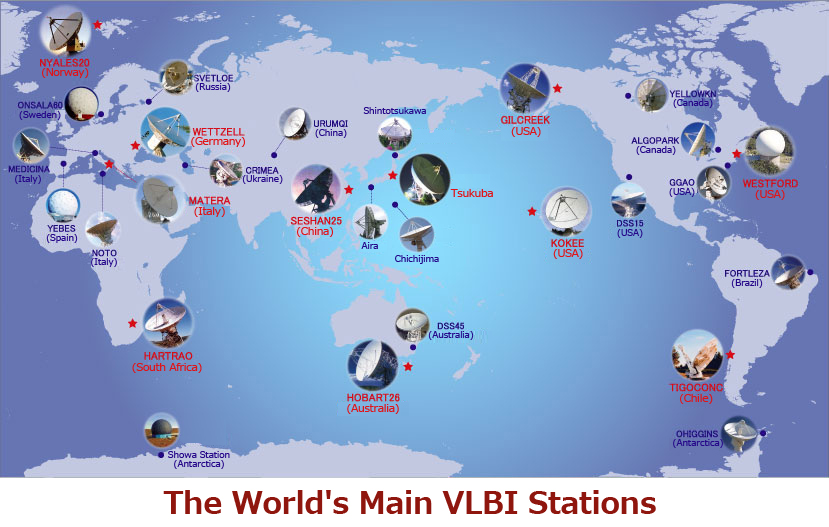 The Geospatial Information Authority of Japan (GSI, an organization under the Ministry of Land, Infrastructure, Transport and Tourism) is making use of SINET3 service for international sharing of the massive amounts of data collected from VLBI (very long baseline interferometry) observations. We talked with Shinobu Kurihara, in charge of analysis and operation in the VLBI Group of the GSI, about the importance of networking in geodetic VLBI and about current projects.
(Interview date: July 9, 2009)

Please tell us first of all about the objectives of VLBI observations in the GSI.

Kurihara: As you know, the GSI is a government body responsible for surveying and mapping. Paper maps used to be the norm, but today information of all kinds is being put into digital form so that it can be used more readily in people’s lives. As a legal framework for such activities, in 2007 the Basic Act on the Advancement of Utilizing Geospatial Information (NSDI Act of Japan) went into effect. VLBI is the earliest phase in surveying and mapping. Its specific objectives can be summarized as (1) monitoring plate movement, (2) determining the position of the earth and world locations, (3) monitoring the earth’s orientation, and (4) supporting international cooperation.

Please tell us more about these four objectives.

Kurihara: Starting with the first, monitoring plate movement, this of course relates to the earth’s surface consisting of multiple plates, each of which moves independently. For example, the Pacific Plate subducts beneath the North American (Okhotsk) plate in the vicinity of the Japan Trench, dragging the North American plate with it, and causing so-called inter-plate earthquakes. VLBI observations of plate movement are a basis for investigating and predicting quakes. Plate movement is very small, at only a few centimeters per year; but VLBI is capable of accurately measuring this movement with millimeter precision. The distance between Japan and Hawaii, incidentally, is becoming shorter by around 6 cm each year, something we know thanks to VLBI measurements.

The second activity is for the purpose of deciding the standard for the world’s longitude and latitude and for surveying. In addition to VLBI, technologies such as SLR (satellite laser ranging) and GPS are used. SLR is a technique that measures distance by timing the round trip of laser pulses bounced off satellites equipped with mirror-like retroreflectors. Repeated measurements are able to determine positions relative to the gravity center of the earth. When distance and other information from VLBI observations is added, x, y, z coordinate values are assigned to GPS stations throughout the world. The data from all these sources is then compiled to form an International Terrestrial Reference Frame (ITRF). This is a set of reference geodetic coordinates resulting from scientific observations like VLBI and used as a worldwide standard. It is often referred to as the world geodetic system. Japan previously used a geodetic reference system based on technology from the 19th century, but has since changed to the ITRF-based world geodetic system.

The third objective, monitoring the earth’s orientation, involves measuring the behavior of the earth’s rotation and axis of rotation. The earth’s axis does not remain static in the same position but is in polar motion, drifting slowly in a circle with a radius of around 10 meters. The orientation of the earth at a given time must be known accurately in order to control rockets or satellites in space. When NASA landed an explorer on Mars, they relied in part on VLBI data from Tsukuba. The speed of the earth’s rotation is likewise not a precise 24 hours per cycle but averages approximately 2/1000 second longer, and varies moment by moment. Atomic clocks are used as standards for keeping track of time, but corrections must be made for the difference between the time based on the earth’s rotation (UT1) and atomic clock time (UTC). If this were not done, in the distant future the sun would still be in the eastern sky even at noon, for example. This compensation is made by inserting a ”leap second” periodically based on precise VLBI measurements of the earth’s rotation.

The final objective is international cooperation. Coordination of efforts among countries and organizations around the world is vital to geodetic VLBI. The GSI therefore takes part in the International VLBI Service (IVS) established in 1999 and carries out a variety of activities as a core member.

So the role of networks in VLBI observation is huge.

Kurihara: That’s right. In the past, data was recorded on magnetic tapes, which had to be transported physically for correlation processing. GSI staff used to wait at Narita airport so they could get their hands on the tapes sent from Germany as soon as possible. (laughs) Now that e-VLBI has been made practical thanks to networks, the need to send magnetic tapes no longer exists. The size of VLBI observation data is massive, amounting to around 1TB of data for each of the weekly 24-hour measurement sessions. High-speed networks are essential for exchanging so much data in a short time.

And for that you rely on SINET3.

Kurihara: Yes. Looking back over the history of e-VLBI in Japan, in the 1990s the Communications Research Laboratory (currently the National Institute of Information and Communications Technology [NICT]) conducted geodetic VLBI experiments using ATM leased lines. In the GSI, we have used such technologies as ISDN and IP-VPN for measurement equipment control and monitoring, but sending more than 1TB of observation data at communication rates of around 128Kbps was not practical. We started sending data overseas in earnest in 2004, using GEMNet2 and Super-SINET services. Then in 2008 we began using SINET3 1Gbps lines as the backbone network underlying e-VLBI, forming a network that joins Germany, Sweden, Norway, the USA and other countries around the world.

What benefits from using SINET3 would you point to?

Kurihara: The ability to transfer massive amounts of data, which I mentioned earlier, plus the possibility of performing observations in closer to real time. At Tsukuba, for example, we carry out observations every weekend together with the Wettzell Observatory of BKG (Germany’s Federal Agency for Cartography and Geodesy) for measuring the speed of the earth’s rotation. The data from Saturday’s observations is automatically transferred right after they are made and can be processed on Monday morning. This would not have been possible with magnetic tapes or disks, which had to be air freighted.
What’s more, we are now testing a work flow whereby observation data is sent over the network directly from the sampling device, without being recorded on disks at the observing station, and is processed in Japan. In this way it is possible to find the earth’s rotation speed in closer to real time. In experiments carried out in 2008 jointly by the GSI, NICT, Onsala Observatory (Sweden), and Metsahovi Observatory (Finland), the dUT1 value for the speed of the earth’s rotation was found in 3 minutes 45 seconds following one hour of observation. I think this is probably the fastest time in the world.

So SINET3 and the other science information networks around the world are contributing greatly to e-VLBI progress.

Kurihara: That’s exactly right. With VLBI, there is no such thing as too much network capacity. The wider the network capacity, the more accurate and faster the observation. Today we can obtain effective transfer rates of 600Mbps, enabling1TB of data to be sent in a few hours. In the future, as advances are made in sampling equipment performance and so on, the data size will keep getting larger, so we very much hope SINET will continue advancing as well. For our part, we would like to do all we can to raise the presence of Japan in the international VLBI observation network.