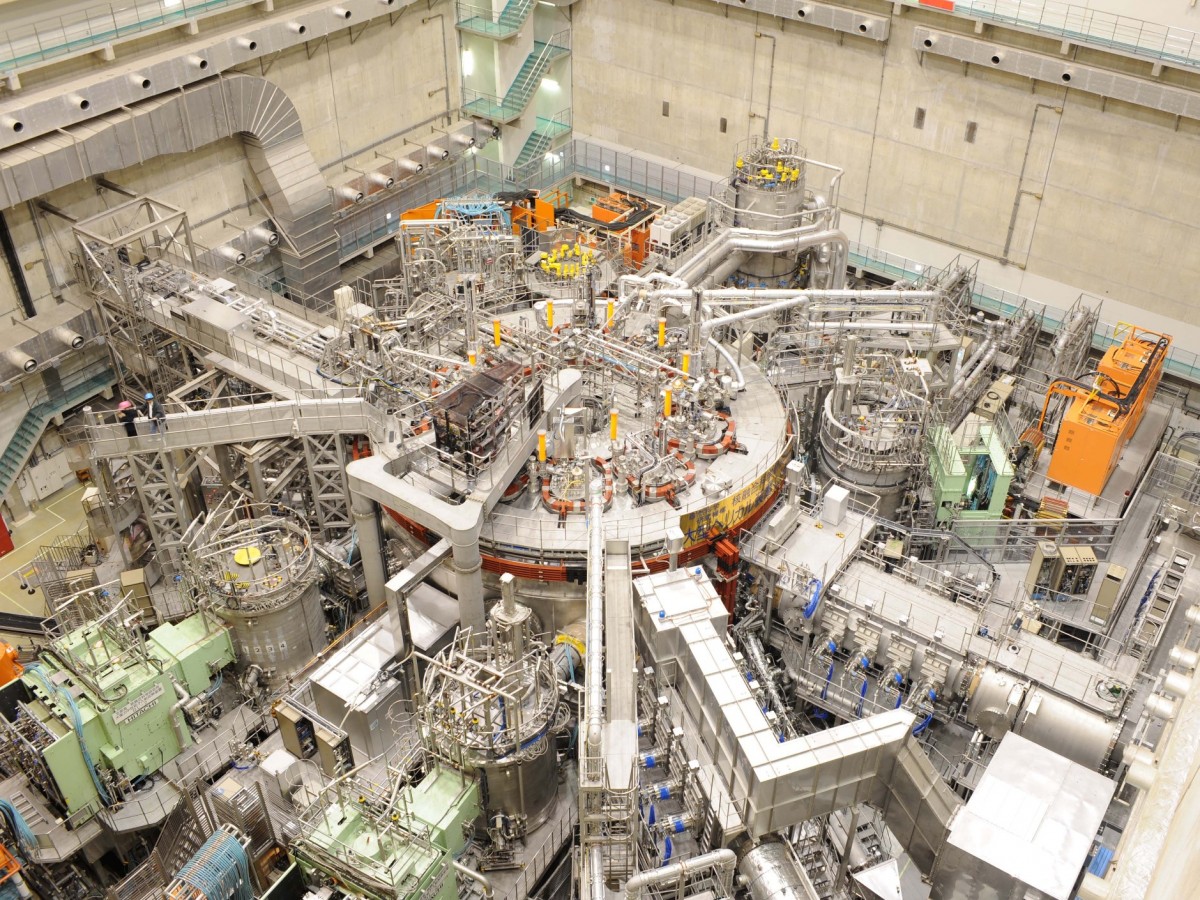 The National Institute for Fusion Science (NIFS) is building a network-based virtual laboratory system for nuclear fusion research, to integrate various nuclear fusion experimental and research environments in Japan. In June 2008, the QUEST experiment of Kyushu University was added to the system for remote data collection and distribution. Many other projects are being incorporated into the system as well. We talked with Associate Professor Hideya Nakanishi, NIFS High-Temperature Plasma Physics Research Division, and Assistant Professor Takashi Yamamoto, NIFS Department of Simulation Science’s Network Working Group, about the role played by SINET and the outlook for the future.
(Interview date: November 28, 2008; updated January 18, 2010)

Could you tell us first of all about the goals of NIFS activities and about your own areas of specialty?

Nakanishi: NIFS is an organization that conducts research into nuclear fusion reactions and high-temperature plasmas, which are seen as possible future energy sources. Among its many advantages, nuclear fusion has fewer hazardous byproducts than other energy production methods and uses hydrogen as fuel. Our goal is to achieve practical realization of this clean energy in a safe manner.
I personally am in charge of the experimental data system for the Large Helical Device (LHD) operated by NIFS. The LHD has been in operation for more than 10 years, but is still relatively new in the nuclear fusion field. Therefore, it produces the biggest amount of experimental data in the world. Besides acquiring and analyzing the LHD data, our role is to provide the data access services to other research institutes and universities.

Yamamoto: Department of Simulation Science, where I work, performs simulation research for plasma and fusion, and develops a 3D immersive virtual reality system. I’m an administrator of an information network of NIFS.

Please tell us about the virtual laboratory system for nuclear fusion research that you are promoting at NIFS.

Nakanishi: Plasma experiments produce huge amounts of data. Up to now, when some collaborator outside the institute wants to participate our experiment, the people had to visit our facility and stay throughout the period of the experiment. Visitors have to waste so long time for travel, and in some cases there happened serious conflicts between the visitor’s schedule and the experimental period.

Then along came Super SINET service, so we decided to look into the idea of conducting joint experiments over the network, in other words, a virtual laboratory. In effect, we wanted to put the virtual LHD control room in each collaborative laboratory of remotely connected university. The initial project for remote participation in LHD experiments started in 2002.

And SNET provides the network infrastructure for this project, right?

An outline of remote participation in LHD experiments is that views of the LHD control room are sent via a videoconferencing system, and at the same time control of the LHD measurement instruments and data collection are performed over the network from the remote site. In the case of Kyoto University, for example, initially, the adjusting of instruments and so on were done with the assistance of NIFS staff, but lately almost all the steps to set up instruments for data collection are controlled from their site.

I understand you are using SNET also for collecting and distributing data from the Kyushu University new QUEST.

Yamamoto: Since 2005 SNET has been newly employed for remote use of supercomputer and the All-Japan ST (spherical tokamak) research program, the latter involving QUEST. Diagnostic data of the QUEST experiments are acquired into the NIFS LHD data system through SNET and are distributed to collaborating universities and research institutes.

The issue is how to transmit the large volume of experimental data at high speed. The L3VPN, used since SNET was first built, could be administered flexibly; for example, it is possible to create several groups with different purposes by simply installing a single router. For exchanging large amounts of measurement data, however, a fast network environment with less delay is preferable. For this reason we adopted the SINET3 L2VPN service on the network between QUEST and NIFS. By using this service, we hope to achieve a 1 Gbps transfer rate.

Nakanishi: Being in charge of the data system, I am faced with the problem that the amount of data from plasma experiments continues to grow year by year. In case of LHD, for example, the amount of data each day is more than one terabyte, which corresponds to 300 or 400 gigabytes after compression. When this massive amount of data is needed to be shared within a definite research group, the L2VPN service will be quite advantageous. Packet loss is minimal, since it’s not necessary to go through many routers. This by itself makes us very glad the SINET3 L2VPN service was started.

Another advantage of this L2VPN service is that it enables us the effective use of multicasting. A plasma experiment consists of presetting procedures, discharge itself, and post-processing. This sequence is repeated with three-minute intervals at LHD and five-minute intervals at QUEST. L2VPN multicasting is extremely useful for properly synchronizing to this timing between remote sites. For example, upon hearing the multicast message, “The experiment will start in 30 seconds,” sites can go on standby. In other words, we can use SNET not only as a data transferring way but as a control network for experiments. Thanks to this capability of SINET, we expect that such the way of remote experiments will be widespread greatly.

You are also going ahead with international joint research projects, right?

Nakanishi: Experimental devices become bigger and bigger with the years, reaching a scale where they can hardly be financed by a single country. That’s why we are pursuing the ITER international joint research project. ITER is a huge nuclear fusion reactor being built in Cadarache in Southern France, for which Japan will be building a remote research site at Rokkasho-mura in Aomori Prefecture. Construction of the ITER facility is getting started with the aim of completing it by 2018.

When the ITER experiment begins, all the data are to be sent to Rokkasho-mura. One idea being floated is to have ITER used continuously by Japanese and then French scientists, taking advantage of the seven-hour time difference between Japan and France.

The massive amount of data is an issue here, too, of course. ITER will produce enormously bigger data than LHD, and thus we have to find the way how to transfer that data from France to Japan and then to re-distribute them to all the Japanese universities and research organizations. That gives us plenty of reason to hope for the continued development of SINET.

What are you looking forward to as you go ahead with your work in the future?

Yamamoto: From my standpoint of the network administrator, first of all, I would like to thank to the network administrators all of the universities and research institutions. I’m deeply appreciative of their quick response during the operation of SNET. Personally, I would like to get involved in new challenges, including but not limited to networks.

Nakanishi: We introduced a distributed architecture in the LHD experimental data system rather early on, starting within LAN and later expanding to the WAN level. What’s more, we have gone beyond simply one-way traffic from the LHD, realizing two-way data utilization as with the QUEST project. In the future I would like to expand this environment to overseas, creating a global virtual laboratory system, and in that way contributing toward practical implementation of nuclear fusion.