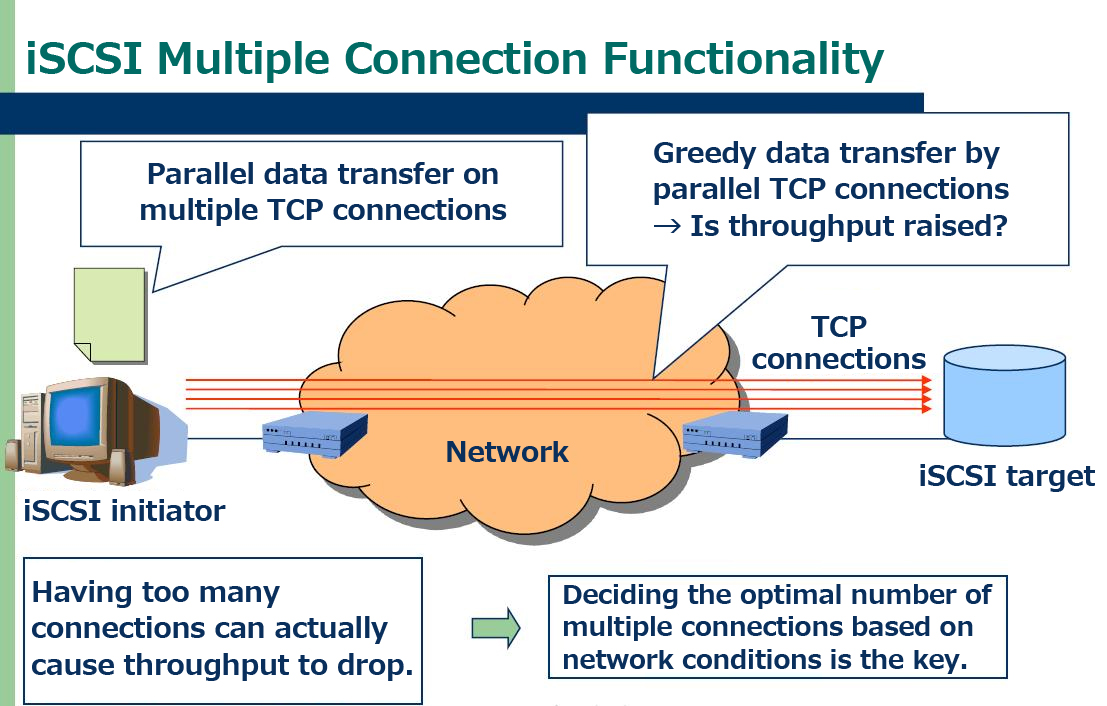 The Information Sharing Platform Laboratory in the Department of Information Networking, Osaka University Graduate School of Information Science and Technology, is conducting research on technology for transferring large volumes of data over networks. We talked with Associate Professor Hiroyuki Ohsaki of this Laboratory about tests carried out using the SINET3 L1 on-demand service to evaluate the performance of iSCSI-APT (iSCSI with Automatic Parallelism Tuning).
(Interview date: September 29, 2009)

Could you tell us first about the research themes of the Information Sharing Platform Laboratory?

Ohsaki: Our laboratory is engaged in research in two main areas. One is how to send large amounts of information quickly and accurately. The second is how to distribute information of various kinds in ways that make it readily accessible and usable by human beings. In terms of the OSI reference model, the former deals with relatively low layers such as the Network Layer and Transport Layer, while in the latter research we are working at higher layers. I myself have spent many years studying network control, and am currently doing research on user-centered network environments. If we can realize the kind of network that changes flexibly based on the relationship between those sending and receiving information, I believe this could have major benefits for the information society.

The emphasis on letting students take the initiative is a big feature of our laboratory. Especially since the research is on networks of the future, we consider it important for young people to be free to come up with their own ideas. Quite often in actually talking with students, I have been amazed at the differences in their way of thinking. They are conducting quite original, or should I say ”striking” research, and I believe it is from such ideas that new networks will eventually emerge.

Please give us some background on the current project, evaluating iSCSI-APT performance using the SINET3 L1 on-demand service.

Ohsaki: There has been plenty of research on high-speed sending of large data amounts regarding the lower layers such as optical fiber and WDM. Yet there remains the known problem of poor performance when actually sending data across links between remote points. Meanwhile, as companies build disaster recovery systems and the like, there are strong demands for technology to achieve efficient high-volume data transfer. We therefore took up the issue of fast, high volume transfer, focusing on storage networks. We chose iSCSI as the base because it is a very simple protocol, using SCSI commands sent on IP packets, and has wide OS and product support.

How does iSCSI-APT work and what are its features?

Ohsaki: Basically the idea of iSCSI is to achieve parallel data transfer on multiple TCP connections, but in reality it does not work as planned without taking additional measures. Throughput can actually drop when there are too many connections. It’s sort of like a freeway with so many trucks travelling on it that traffic congestion occurs. With iSCSI-APT, the number of parallel connections is raised in stages and at the same time throughput is monitored, in order to adjust to the optimal level of multiple connections. In the traffic example, it would be like controlling the flow of trucks onto the freeway before congestion occurs, allowing trucks to travel efficiently.

There are three main features of iSCSI-APT. The first is that optimization is performed utilizing only the fact that TCP throughput is a convex function. It does not depend on any other elements such as network configuration or lower-layer protocol. It can therefore be used in any general network environment. The second is that it can be implemented in the iSCSI initiator alone, that is, in software in the computer sending or receiving data. Since there is no need to alter the target environment, that is, the data storage side, existing iSCSI storage can be used as is. A third feature is more of a limitation, namely, its usefulness as a protocol is pretty much limited to remote backup and other bulk consecutive transfer of large data amounts.

What are your aims in using L1 on-demand service?

Ohsaki: Sending very large data amounts over a wide-area network is a particularly hot topic in network research. Our problem is the lack of a place to test out various kinds of theories. So in most cases we have had to install delay-causing equipment or the like in a LAN environment and emulate a remote end-to-end environment.
Using SINET3 L1 on-demand service lets us test in an actual network environment rather than using emulation. What’s more, we get to use extremely fast and clean L1 paths, not L2 or L3 paths. Since ordinary Internet links are a noisy environment, there are limits to how much testing accuracy can be improved. When the result is not as expected, it is difficult to determine whether the fault is on our end or elsewhere. With L1 on-demand service, such problems can be eliminated. And in fact, in our testing for this project, the same conditions nearly always yielded identical results.

So it’s really an ideal service for research like this.

Ohsaki: That’s right. One more advantage is the ability to acquire the necessary bandwidth when needed. For general usage, the more bandwidth the better; but in our research we wanted to create test scenarios for a variety of different cases. The results for 10Gbps and those for 300Mbps are equally important. For that reason, we are highly appreciative of the ability in L1 on-demand service to allocate bandwidth in 150Mbps units.

How did you evaluate iSCSI-APT performance and what were the results?

Ohsaki: Starting in the fall of 2008, we conducted data transfer tests between our joint research partner NTT Service Integration Laboratories (in Musashino-shi, Tokyo) and Osaka University (in Suita, Osaka). We evaluated a number of different patterns, varying bandwidth in 150Mbps units as I mentioned earlier. The effectiveness of iSCSI-APT was demonstrated in every case. Currently we are conducting experiments with Hokkaido University and are also planning tests with Kyushu University. Theoretically, the emulator environment we used before should have yielded the same results as L1 paths, but when we tried testing in a real environment we found there were some differences in behavior. We are now looking into the causes, but it’s really interesting to discover there are some phenomena that cannot be understood without using this kind of real network.

Finally, what else do you want from SINET?

Ohsaki: The SINET network is of very high quality and offers excellent support. In this project we initially experienced trouble in the connectivity testing stage, but we were able to pinpoint the problem based on information provided by NII. We are really thankful for the helpful support we received. SINET is an indispensable infrastructure in our research, and one that we definitely hope will continue advancing. I understand that many new features are being planned, such as provision of a bandwidth reservation API and dynamic bandwidth changes. We very much look forward to these. I believe that in the coming society, networks able to convey people’s feelings and thoughts naturally will be necessary. We also want to engage in research toward making this a reality.