Skip to content
close
menu
TOP > Use cases > The ”Belle Experiment”: A Major Contribution to Confirmation of the Theory of Kobayashi and Maskawa, Nobel Laureates in Physics 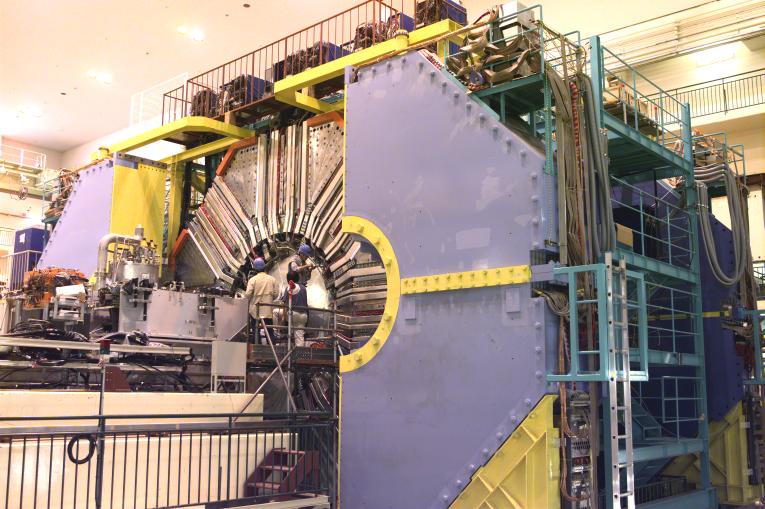 Dr. Makoto Kobayashi, professor emeritus of the High Energy Accelerator Research Organization (KEK), and Dr. Toshihide Maskawa, professor of the Faculty of Science, Kyoto Sangyo University, and professor emeritus of Kyoto University, were awarded the 2008 Nobel Prize in Physics for their Kobayashi-Maskawa theory. The Belle experiment, carried out at KEK, contributed greatly to confirmation of the theory. We asked Professor Nobuhiko Katayama of KEK’s Institute of Particle and Nuclear Studies to outline the Belle experiment and discuss SINET’s role therein.
(Interview date: November 14, 2008)

You have been involved in the Belle experiment at KEK for many years, haven’t you?

Katayama: Before that I was doing research with one of the particle accelerators at Cornell University, but about 10 years ago I joined the Belle experiment group at KEK. This project was launched in 1994 with the aim of confirming the CP violation in B mesons predicted on the basis of the Kobayashi-Maskawa theory. To do this, we built the KEKB accelerator, which boasts the world’s highest performance, and the Belle detector, whose sensor system contains about 200,000 channels. The actual experiment began in 1999.

The experiment led to the Nobel Prize for Professor Kobayashi and Professor Maskawa.
Could you explain in detail what ”CP violation” means?

Katayama: It was originally thought that the laws of physics should be the same for the particles and the antiparticles generated by the Big Bang. Put very simply, it was thought that even though they had opposite charge and parity, they behaved identically. In 1964, however, a discrepancy in their behavior was discovered in the decay process of particles known as K mesons. The mirror symmetry presumed to exist between particles and antiparticles was not conserved. This is the phenomenon known as CP violation.

Physicists put forward a number of theories to explain this phenomenon. One of these, the Kobayashi-Maskawa theory, predicted that CP violation could be explained if there were six types of quark. Since only three types were then known to exist, this was quite a revolutionary proposal. The other three types were discovered by the mid-1990s, and Kobayashi-Maskawa’s postulate was satisfied.

The theory also led to the prediction that CP violation should be observed in the decay process of the B meson, which contains a bottom quark, the second-heaviest of all quark species.

And the experiment set out to confirm that?

Katayama: Yes. There was one problem, however. To observe the CP violating decay process experimentally, you need to generate very large numbers of B mesons. But even the most advanced accelerator available at the time could generate only about one every 10 seconds. To confirm the Kobayashi-Maskawa theory, we needed at least 100 times that number. That was where construction of the KEKB accelerator and the Belle detector came in. The name ”B factory” is sometimes applied to the accelerator because it is a kind of factory that mass-produces B mesons.

In the summer of 2001, two years after we started our experiment, a large CP violation in the B meson system was observed both by our group, using the KEKB accelerator and Belle detector, and by a group doing a similar experiment at Stanford University. This success was a major contribution toward confirming the Kobayashi-Maskawa theory.

The KEKB accelerator and Belle detector are a large-scale facility, and the system for analyzing the data must also be on a fairly large scale?

Katayama: The circumference of the KEKB accelerator is 3 kilometers and light travels about 300,000 kilometers per second, which means that electrons and positrons cross each other 100,000 times a second. In the experiment, only intriguing events are extracted, but there are still some 200 events per second to be recorded, and this means that the daily data volume amounts to about 1 terabyte.

Do you record all those data?

Katayama: A unique feature of our research is that data recorded yesterday and data recorded eight years ago are equally valuable, equally useful for analysis. As a result, we now have about one petabyte of data on hard disks and about five petabytes on magnetic tapes. And this volume will go on growing rapidly.

Networks play an important role along with the analysis system and storage devices. The data outputted from the Belle detector are analyzed not only at KEK but also, in parallel, at our partner universities. Similarly, simulation data prepared at the universities are brought to KEK. For this reason, a high-speed network is essential for the exchange of large volumes of data in short periods of time.

And SINET fills that role?

Katayama: That’s right. In the Belle experiment, we previously used SINET and Super SINET, and we are now using SINET3’s L3VPN service to connect KEK with Tohoku University, Tokyo Institute of Technology, the University of Tokyo, Nagoya University, and Osaka University. SINET’s networks are also used to exchange data for joint research with other universities across Japan and some 40 universities and research institutes in 14 countries abroad. In other words, SINET is the main artery of the networks supporting the Belle experiment.

How do you rate its performance and reliability?

Katayama: At peak times, for example, when papers are about to be presented at an international conference, we exchange a data volume of up to several tens of terabytes, but thanks to the bandwidth of 10–40 Gbps, we have never had any complaints about the network. When I think back to the days when we used to send data to overseas institutes on magnetic tapes, I’m struck by how much the environment has improved. It’s also very reliable—our work is never held up by technical trouble. There are two sides to research, international competition and international collaboration, and the fast, high-volume network environment that SINET provides is very significant in both respects.

Where will you go from here with your experiments?

Katayama: We have achieved our original goal of confirming the Kobayashi-Maskawa theory, but in the meantime many new research problems have emerged. For example, in the universe now we find only particles, and no antiparticles, but when the universe was created by the Big Bang some 13.7 billion years ago, there should have been equal numbers of both. The antiparticles are thought to have disappeared due to a massive CP violation. To fully explain such a phenomenon, a more fundamental theory is required. Various new proposals have been put forward, but as yet there is none as decisive as the Kobayashi-Maskawa theory in its day. You could say we have embarked on a new Age of Discovery.

In light of this situation, I think experimentation will play an even more important role in the future. And so our group has proposed building a ”Super KEKB” and a ”Belle II” 100 times as powerful as our existing facilities. In the future, we’d like to win more Nobel Prizes in experimental fields, following on those in elementary particle theory and condensed matter physics.

Of course, multiplying the data volume a hundredfold will put greater demands on the network’s performance and reliability. Thus, we continue to have high expectations of SINET’s services in the future.