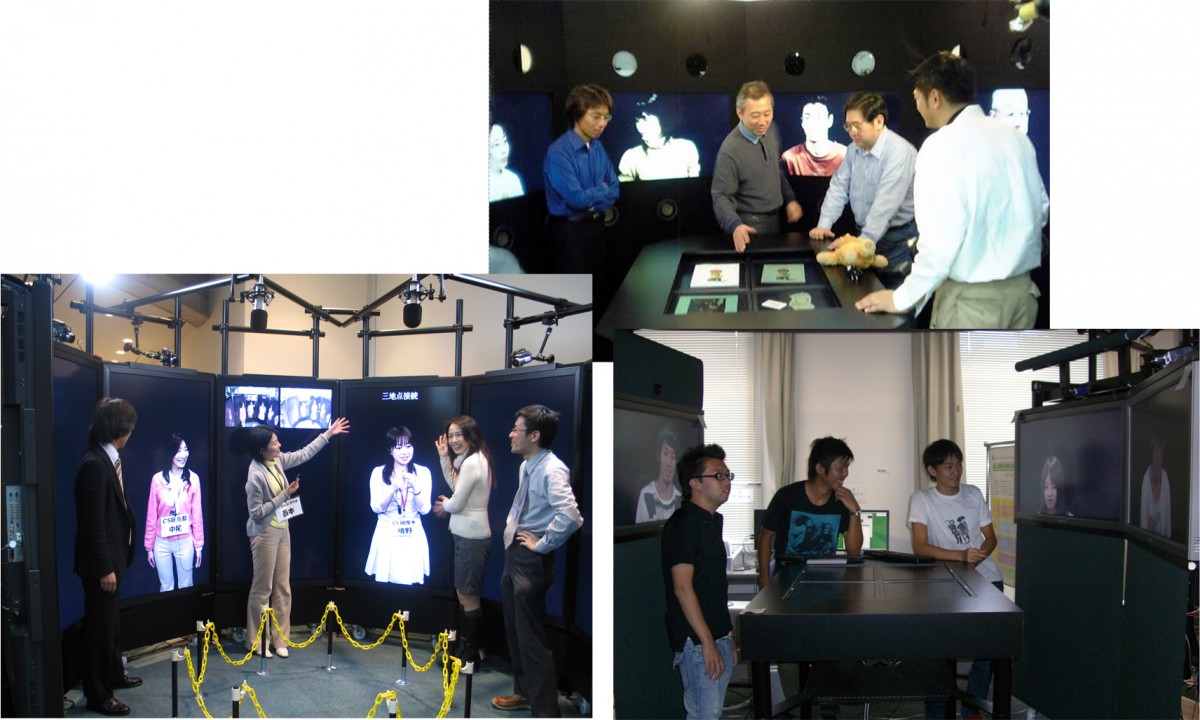 The Co-Creation Informatics Laboratory at the Doshisha University Faculty of Science and Engineering, in conjunction with NTT Communication Science Laboratories, has been researching the t-Room room-sharing communication system. We spoke with Professor Shigeru Katagiri of the Department of Information Systems Design, Doshisha University Faculty of Science and Engineering, and Senior Researcher Toshihiro Takada of the Nippon Telegraph and Telephone Corporation NTT Communication Science Laboratories, about an overview of the system and the role of SINET therein.
(Interview date: October 22, 2010)

Professor Katagiri, your laboratory is named the “Co-Creation Informatics Laboratory.”
What meaning is associated with this name?

Katagiri: The laboratory was originally launched when the Department of Information Systems Design was established in 2004, and at the time, we gave a great deal of thought about what name to assign it. We came up with the idea that what comes after communication is collaboration. Informatics itself is an academic framework directly connected to the lives of people. Just as automobiles extend the actions of humans, computers and networks extend the activity of human’s brains. When computers and networks connect people with other people, then that becomes communication, and if we take one step further to enable people to engage in tasks together, that leads to collaboration. Considering the ideal shape of informatics in the future, we thought it would be good to put forth this concept of collaboration, or in other words “co-creation,” as a theme. My own research centers on things such as pattern recognition theory, and since there are many parts where pattern recognition theory is utilized in the research and development of t-Room, which is the subject of this interview, I find it really interesting. In addition, we also conduct research into data mining at the laboratory.

Could you explain about the t-Room that was just mentioned?

Takada: t-Room is a communication system that NTT Communication Science Laboratories (“CSL,” hereafter) has continued to study for more than a decade. The key concept of t-Room is “room-sharing,” a term we have coined to represent achieving the feeling as if distant participants are actually in the same room. In general, teleconferencing systems are widely known as a means for remote parties to engage in video communication. However, in teleconferencing, the other party is on the other side of a “window,” which is the display, so this stops short of removing the this-side-that-side communication wall. Given this situation, with t-Room we have sought to realize communication and collaboration with a greater sense of unity by superimposing rooms with identical layouts that exist at remote locations.

Specifically what kind of configuration does this involve?

Takada: In its current iteration, the t-Room is configured as a polygonal space with multiple displays arranged on the walls. Video cameras installed above each display record the image of the person directly in front, and when a participant stands with their back to a wall, their image is projected on the corresponding displays in t-Rooms at other locations. If a participant moves to an adjacent wall, their image will be transferred to the corresponding display in the same manner, and if a participant points in a certain direction, all participants will be able to see in that direction. Simply put, all persons in the t-Room possess the same spatial awareness. In this way, we are able to achieve a realistic room-sharing experience as if everyone had gathered neatly into the same room.

Moreover, t-Room does not just transcend spatial barriers. Since it is equipped with image recording features, it is possible to collaborate with tasks carried out in the past. For example, if you replay a meeting you were unable to attend, you can experience an atmosphere as if you were actually there. In addition, if you speak while playing back the meeting footage, the appearance of your doing so will also be recorded, allowing you to create a space in which it seems you actually attended and spoke at the meeting. In this way, through the use of t-Room we can also transcend the barrier of time.

As I understand it, SINET has been utilized as the infrastructure for this research.

In our research, the transmission quality of a network has important implications. For example, in one of the experiments we’ve conducted there is a “remote ensemble.” This involves participants with instruments at remote locations playing music in unison, and delay issues have a huge effect on this. Given this, we carry out delay control and do other things to analyze the impact, but if the network itself has a lot of instability, we cannot properly assess the effects of this control. On this point, if we used the SINET3 L1 On-demand service, there would be no concern about facing such troubles.

Takada: The fact that we can easily collaborate with other universities and subscribing organizations is also considered to be a significant advantage of SINET. For example, we exhibited t-Room at the memorial meet of the Information Processing Society of Japan, which was held in March 2010 at the University of Tokyo. At this time we were also able to perform demonstrations simply by connecting the University of Tokyo node to the NII Hitotsubashi node through the L1 On-demand service. This kind of flexibility is only possible through an academic network.

For CSL, in what areas does the significance of conducting research together with university laboratories lie?

Takada: I suppose it’s the outside-the-box ideas that are unique to young people. Students boldly challenge the themes which pro researchers such as ourselves find it difficult to get involved in. For example, even something like the remote ensemble we just gave as an example is something that has been researched for a long time, and there are many researchers who consider it to be difficult to achieve in practice. But the students who presented those research findings at an academic meeting even managed to win a presentation award, something given to only two out of the 32 cases presented. From such positive attitudes, we often gain stimulus and clues as well.

Katagiri: Indeed. Since technologies from a broad array of fields, such as audio and visual, computers, networks and human interfaces, are used with this system, a number of studies are possible depending on the interests of students. The experience of having contact with such things is sure to come in handy even after these students have entered the workforce. Incidentally, we conduct open laboratory sessions at the Kyotanabe Campus in February each year for students to decide where they wish to be posted for graduation work, and even in this context the t-Room appears to have a significant impact on students.

It looks like t-Room will continue to evolve in the future.

Takada: For NTT’s part, there is the aspect of exploring the future realization and commercialization of the system, but we also hope to pursue the possibilities of t-Room itself. For example, I think we can consider a number of ways to utilize the feature of collaboration with past footage that was touched on earlier. As t-Room is a communication system without precedent, I think there are still many things to try.

Katagiri: For us at the university, we’ve finally managed to establish our foundations. For instance, last spring we sent out the first crop of master’s degree holders. In the future, we hope to develop the sort of extensive research of which only a university is capable. However, the existence of a network such as SINET is essential to the continuation of this kind of research. Information networks have already become something to be regarded on the same level as electricity grids and the water supply, and the ability to use networks is something expected of any university or research institution. For Japan to continue to be a leader in terms of advanced information-driven society, there are great hopes for the development of SINET.