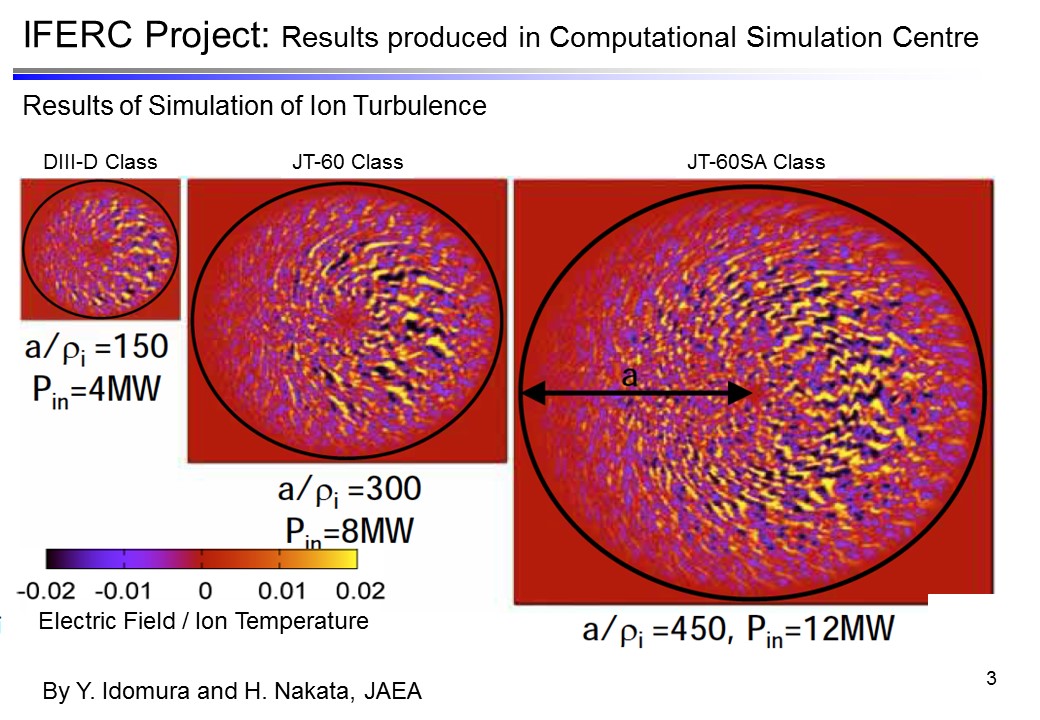 Japan Atomic Energy Agency (JAEA), an independent administrative agency, engages in the Broader Approach (BA) activity aimed at supplementing and supporting the International Thermonuclear Experimental Reactor (ITER) project and at establishing the technical basis of a DEMO reactor (prototype reactor for demonstration). We spoke with Noriyoshi Nakajima, a professor at the National Institute for Fusion Science in the National Institute of Natural Sciences, an Inter-University Research Institute Corporation, and project leader of the International Fusion Energy Research Centre (IFERC) in the Broader Approach, and with Takahisa Ozeki, chief researcher at the Fusion Research and Development Directorate at the JAEA, about the outline of the IFERC and the roles that SINET has to play.
(Interview Date: November 8, 2013)

First, will you tell us about the details and purposes of the Broader Approach activity?

Ozeki：Fusion energy is attracting expectations as a next-generation energy source. Deuterium, or heavy hydrogen, can be obtained from seawater as fuel. It means that an almost inexhaustible amount of deuterium exists on our planet. The suspension of fuel supply immediately stops the fusion reaction, which demonstrates the safety of the principle. Fusion energy has many advantages, including these. Now, an International Thermonuclear Experimental Reactor (ITER) is being constructed at St. Paul-les-Durance (Cadarache) in France by seven member states, namely Japan, Europe, the United States, Russia, China, the Republic of Korea and India. International efforts to realize the fusion energy are underway. However, a successful experiment in ITER will not mean that electric power can immediately be generated. ITER is the facility for demonstrative research on continuous burn of nuclear fusion. It is necessary to address the engineering challenge of obtaining fusion energy, to develop materials that can withstand a long period of operations and to create a plasma for efficiently producing energy. Prior to the realization of commercial electric power generation by nuclear fusion, it is necessary to build the DEMO reactor for proof of electric power generation to examine technical and economical feasibility. The BA activity is aimed at assisting the ITER project, at conducting research and development on nuclear fusion and at establishing the various technological bases with a view towards developing the DEMO reactor.

The BA activity is a joint project between Japan and Europe. The JAEA, to which I belong, is the body working on the project from the Japan side. Under a Steering Committee consisting of Japanese and European members, three projects are underway, namely the International Fusion Materials Irradiation Facility / Engineering Validation and Engineering Design Activities (IFMIF/EVEDA) project, the International Fusion Energy Research Centre (IFERC) project and the Satellite Tokamak Programme (JT-60SA) project.

The BA activity covers what cannot be done by ITER alone and works to establish technical basis necessary to the DEMO reactor. What specific activities are conducted at the IFERC?

What research outcomes have been attained so far?

Nakajima：Individual activities have delivered a range of results. In the activity on design, research and development of materials of the DEMO reactor, Japanese and European researchers used to conduct their studies on the basis of their respective concepts. Today, physical and engineering design basis supported in Japan and Europe are being integrated. In the aspect of materials research and development, new technologies have been created, such as a method of producing advanced neutron multipliers (beryllides). In the computational simulation activity, the number of applications from universities and research institutions based in Japan and Europe is rising with each year in the first cycle from April to November 2012, there were 62 applications. In the second cycle from November 2012 to November 2013, the figure reached 82. In the third cycle from November 2013 to November 2014, we received as many as 122 applications. As of October 2013, more than 110 research papers had been created. The ITER remote experimentation activity has yet to move into full gear and many different efforts have been made in the preparatory phase. For example, the JT-60SA experimental device is being constructed in the city of Naka in Ibaraki Prefecture under the Satellite Tokamak Programme as part of the BA activity. JT-60SA is another nuclear fusion research device, apart from ITER, that is capable of performing remote experimentation. With the use of this device, a verification process before the ITER remote experimentation will be conducted. The accumulation of the knowledge required for remote experimentation in advance will help facilitate the research after ITER begins operation.

Can you tell us about the role played by SINET?

Nakajima：It plays a very significant role. As I mentioned earlier, a large volume of data will be exchanged between the ITER site in France and the Rokkasho site after the start of the ITER remote experimentation. Especially after the experiments, the data volume will be huge. No research could be done without high-speed network infrastructure with high reliability. This is also true of computational simulation. Networks are indispensable to the remote use of a high performance supercomputer at full capacity. It is SINET that makes it possible. The volume of data accumulated in the simulations conducted from January 2012 to November 2013 reached around 2 PB. We use an approximate bandwidth of 400 Mbps on SINET. The data volume and the traffic will certainly increase in the future.

Ozeki：In fact, SINET was also significant in the phase of international deliberations and negotiations between Japan and Europe towards the BA activity. This project is a Japan-Europe joint project. Each side pays half of the cost. Naturally, European users demand an environment that allows them to use research resources on the Rokkasho site in the same way Japanese users do. So the level of development of the network infrastructure was a very critical issue. SINET is known globally as an academic network offering high speed and high reliability. When we said that we would use SINET, they readily accepted our proposal. That helped us a lot.

Finally, can you talk about the future outlook and your expectations from SINET?

Ozeki：After the ITER remote experimentation begins in earnest, the broadband network will be of greater importance. Among other things, the data obtained from ITER experiments are a significant asset not merely for the researchers but for Japan in general. So I hope that SINET will continue to offer a network environment with high reliability and stability.

Nakajima：Current major research challenges concerning networks include a question as to how a large volume of data should be efficiently transferred. The existing method of transferring data to Europe still has many areas that can be improved. I hope that the Japan side can make new proposals. We have enjoyed great support from the NII and we strongly hope for its support in terms of software, in addition to hardware or network support.