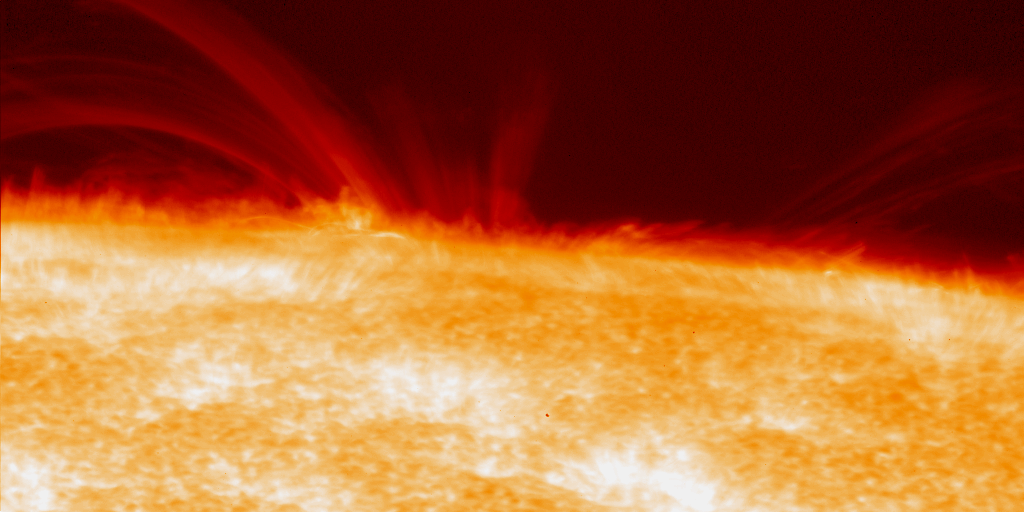 The Institute of Space and Astronautical Science (ISAS) of the Japan Aerospace Exploration Agency (JAXA) is active in a wide range of fields related to space and astronautical science. We spoke with Assistant Professor Takayuki Tamura of ISAS’s Department of Space Science Information Analysis, who told us about using the solar observation satellite Hinode to study the Sun and how SINET is involved in this work.(Interview date: July 3, 2008)

What kind of work is done at ISAS?

So in addition to observing phenomena visible to the naked eye, you make use of X-rays?

Tamura: X-ray observation enables us to study all sorts of phenomena that can’t be understood by means of visible light only. Take the Sun, for example: we can see the corona and solar flares. Also, by conducting spectrum analyses of observation data on galaxy cluster gas, which is present around galaxy clusters, we can find out what elements the gas contains, their proportions, and so on. These analyses enable us to study the origins of the Milky Way.

I see. So it’s important to use a variety of tools in your observations.
I’m told that SINET plays an active part in Hinode research.
Could you tell us about the Hinode satellite?

Tamura: Hinode is a solar observation satellite, for research on the Sun. It is the successor to Yohkoh, which was launched in 1991. In Japan, observations are conducted jointly by ISAS and the Solar-B Science Center http://hinode.nao.ac.jp/en/for-researchers/hinode-science-center/; referred to below as the “Hinode Science Center”) of the National Astronomical Observatory of Japan (NAOJ). Also, in developing observation devices, we cooperate internationally with the National Aeronautics and Space Administration (NASA) in the U.S. and the Science and Technology Facilities Council (STFC; former Particle Physics and Astronomy Research Council [PPARC]) in the U.K., among others.

Hinode’s research mission is to investigate three things: the formation of the high-temperature corona, the source of solar magnetic-field and coronal activity, and elementary processes in stellar plasma. Thus, it carries a solar optical telescope (SOT), an X-ray telescope, an extreme-ultraviolet imaging spectrometer, and other scientific instruments. I should mention that SOT has one of the highest spatial resolutions ever achieved, up to 0.2 arc seconds. This may not mean much to a layperson, but just to give you an idea of its tremendous power, if it observed the Earth from orbit at an altitude of 500 kilometers, it could resolve a feature of 50 centimeters in diameter.

Clearly, it’s a satellite that will help advance solar astronomy.
How is SINET being used?

Tamura: At the Hinode Science Center, they take data that we’ve processed here at ISAS by converting the formats and so on, and they use them to do analyses and make movies and maps of physical quantities. Due to the enormous volume involved, tasks such as synchronization would be very difficult if we merely copied the data. Instead, we have installed a 1 Gbps dedicated line between ISAS and the Hinode Science Center using SINET3’s L1 quality assurance path, and the two institutes share files by NFS. I’m told this serves as an important core system underpinning the Science Center’s work.

How big a volume of data do you handle?

Tamura: At present we handle about 15 terabytes of Hinode data. Other ISAS satellites generate only a few terabytes, so it’s a much larger volume. What’s more, it doesn’t stop at 15 terabytes: as long as Hinode continues its observations, the volume will keep growing fast. To do research with such large volumes of data, it’s essential to have a file-sharing system and a high-speed network. If we didn’t have the setup that we do, users would have to locate every single item of data that they wanted and download it by FTP or something similar, which would take an inordinate amount of time and trouble.

I can see that the file-sharing system via SINET and NFS is proving to be a useful tool for efficient research.
Are there any specific points that you feel are an advantage?

Tamura: What they told me at the Science Center was this: “When Hinode was launched, because we didn’t need an enormous data storage capacity at NAOJ, we were able to put the resources we saved into the analysis system. Also, because file sharing eliminated the need for slow data transfer over the Internet, we got more initial results from the satellite.” They also had this to say about SINET’s L1 quality assurance path: “Having a dedicated line is very convenient as we can do large-volume data transfer without worrying about the other traffic.”

Generally, astronomers at Japan’s public observatories and related institutes tend to have priority access to data and there’s a time lag before it’s made more widely available, but with Hinode we have adopted an open approach, releasing observation data immediately. Many researchers are eagerly awaiting new data, and that’s another reason why high network speed is important–to help meet that demand.

Are there any other ways in which SINET is useful?

Tamura: Over the last few years we have held frequent videoconferences, and SINET has also helped with this active communication. In X-ray astronomy, my own specialty, researchers used to come here to ISAS for meetings from all over Japan, but these days we can cover many aspects of the field through videoconferences. For those who used to attend from distant institutes, it must mean a significant saving of travel costs and time.

Lastly, may I ask about future developments?

Tamura: Since we currently store Hinode data at ISAS only, we are planning to copy data to NAOJ via SINET. This will not only facilitate data use within NAOJ, but will also provide a backup in case of a natural disaster or system outage.

In the future, we hope to be able to share files not just between ISAS and NAOJ but with universities and research institutes around the country. Personally, I hope to make use of observation data from a number of satellites in pursuing research that may lead to new discoveries. SINET’s support will be important in these efforts, and we look forward to your continuing assistance in various ways.