Skip to content
close
menu
TOP > Use cases > The VERA Project: Mapping our galaxy in 3D-kinematics 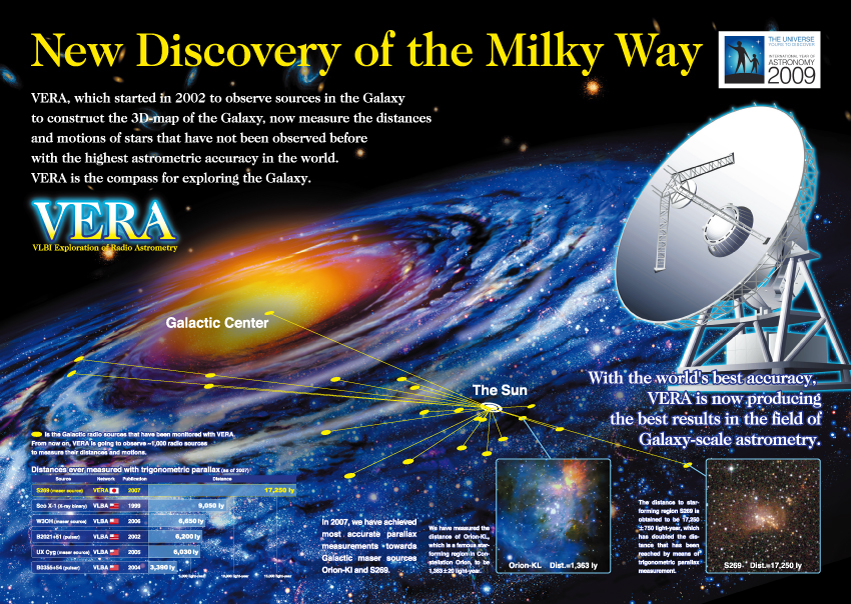 Astrophysics group in Kagoshima University is currently cooperating with the VERA project, which is a joint project with the National Astronomical Observatory of Japan (NAOJ) aimed at making a three-dimensional map of our galaxy. We invited assistant professor Akiharu Nakagawa — an expert in physics and astronomy at Graduate School of Science and Engineering in Kagoshima University— to discuss the utilization of the SINET3 network in the VERA project.
(Date of interview: 9 March, 2010)

Professor Nakagawa, perhaps you could start by describing the work that is being done by your astrophysics group?

What in particular do you find interesting about your specialist field of position astronomy?

Nakagawa: In the field of “astrometry”, we deal with detailed positions and motions of celestial objects, and their distance from the Earth. As it happens, astronomy is more prone to errors than you might think. For example, researchers often measure stellar distances with error margins as large as ±30%. There aren’t many situations where people would be prepared to put up with such vague measurements as these (laughs). But in astronomical measurements, these large error margins are not at all uncommon. There are various different ways of measuring astronomical distances, but they have all tended to be inaccurate in some respects. Nowadays, astronomers have found that by using the VBLI technique to combine the observations made by multiple radio telescopes, it is possible to reduce these error margins to just a few percent. If we can accurately determine the positions of stars, then we can raise astronomy to the level of an exact science. And if we can accurately measure the movements of astronomical objects, then we should be able to shed more light on the problem of “dark matter”, which has recently become a hot topic in astronomy. VLBI itself is also interesting, since it’s a “big science” subject that uses many large radio telescopes.

The VERA project is one of the things you’re working on.
Can you tell us about the purpose of this project?

Nakagawa: VERA is a project that we are working on together with Kagoshima University and the NAOJ with the aim of making a 3D map of the Milky Way Galaxy. I expect all your readers have at some point seen illustrations and computer-generated images showing how our Milky Way galaxy looks from the outside. In general, these are just artist’s impressions. But what we’re working on is a map based on actual measured distances. And we’re not just making a static map either. Our map includes dynamic information about the movements of celestial objects.

So how do you measure the distances of far-away celestial objects?

Nakagawa: In the VERA project, we measure distances using a combination of triangulation and annual parallax. Triangulation is a method for calculating the distance to a remote object from the baseline length and apex angle of a triangle. In VERA, the length of this baseline is calculated based on the distance between the Earth and the Sun. The angles at both ends are produced by the rotation of the earth around the sun, so that a star’s position in spring will be slightly different from the position of the same star in autumn. By measuring this angular difference — or annual parallax, as it’s called — we can figure out the angle of the triangle’s apex. From this information, we can accurately calculate the distance to this astronomical object.

Well that’s how it works in theory at least. In practice things aren’t quite so simple. Since objects outside our solar system are very far away, these triangles are very elongated. For example, the annual parallax of the center of the Milky Way galaxy is really tiny, about one ten thousandth of an arc second.

VLBI is a great tool for making these sorts of precise measurements. In the VERA project, we combine the signals received by four radio telescopes at Iriki, Mizusawa in Iwate prefecture, Ishigaki island, and Chichijima in the Bonin islands to achieve the same performance as a single radio telescope with a diameter of 2,300 km. This makes it possible to perform measurements with a precision of one hundred thousandth of a second. The VERA antenna group constitutes the world’s only dual-beam telescope, which is capable of eliminating the effects of atmospheric turbulence that can cause problems in VLBI observations.

What sort of astronomical objects do you look for?

Nakagawa: Some newborn stars and old stars produce very strong radio emissions. The objects observed by the VERA project are these so-called “maser source” objects. There are several types of maser source, but we’re especially interested in water masers which emit radio waves from water molecules drifting around stars. To create a map of the galaxy, we plan to observe about 1,000 maser sources.

How is network technology used in this project?

Nakagawa: Broadly speaking, we use networks for two purposes. One is to connect the observatories so they can work together, and the other is to allow researchers and students to access and analyze the observation data. Our group introduced SINET3 in 2009, and uses a layer 2 VPN to connect between Kagoshima University and the NAOJ headquarters in Mitaka, Tokyo.

What were your reasons for introducing SINET3?

Nakagawa: In the VERA project, the data gathered at each observatory is recorded onto magnetic tape and is then sent to the NAOJ for correlation processing. After that, the data is turned into a form that can be used by researchers, but previously we had to wait for it to be burnt onto DVDs and sent by post. This process inevitably resulted in extra time delays before we could get our hands on the data, and did nothing to improve the efficiency of our research. It would have been great if we could get direct access to the programs and data at the NAOJ, but there wasn’t enough network bandwidth for us to do this. When we were looking into ways around this problem, professor Kawaguchi at the NAOJ suggested using SINET.

And how did things change when you introduced SINET3?

Nakagawa: Our research suddenly became much more efficient. It also became possible for us to transfer large amounts of image data at high speed, and we were able to exchange data much more easily. For us researchers, the ability to use data without having to worry about bandwidth restrictions is a great benefit. By switching over the connection between NAOJ and the Iriki observatory from a frame relay network to a SINET3 + commercial optical link, it also became easier for us to operate the observatory.

Can you tell us about your plans for the future?

Nakagawa: One of the big issues we’re currently working on is the implementation of correlation processing in real time over the network. The VERA observations produce large amounts of data — over 4.2 terabytes per observatory — so like I said we still have no choice but to transport the data on magnetic tape. If we could send this data across the network instead, then we would be able to carry out our research even more efficiently. We have a lot of overseas rivals in this field, so this will make a significant contribution to Japans’ competitive edge. In this sense, I think there are a lot of hopes pinned on the future of SINET. As for me personally, I plan to continue working on new ways of measuring astronomical distances, which is one of the research themes of the VERA project, and hopefully I will be able to transmit the latest astronomical data direct from Kagoshima.