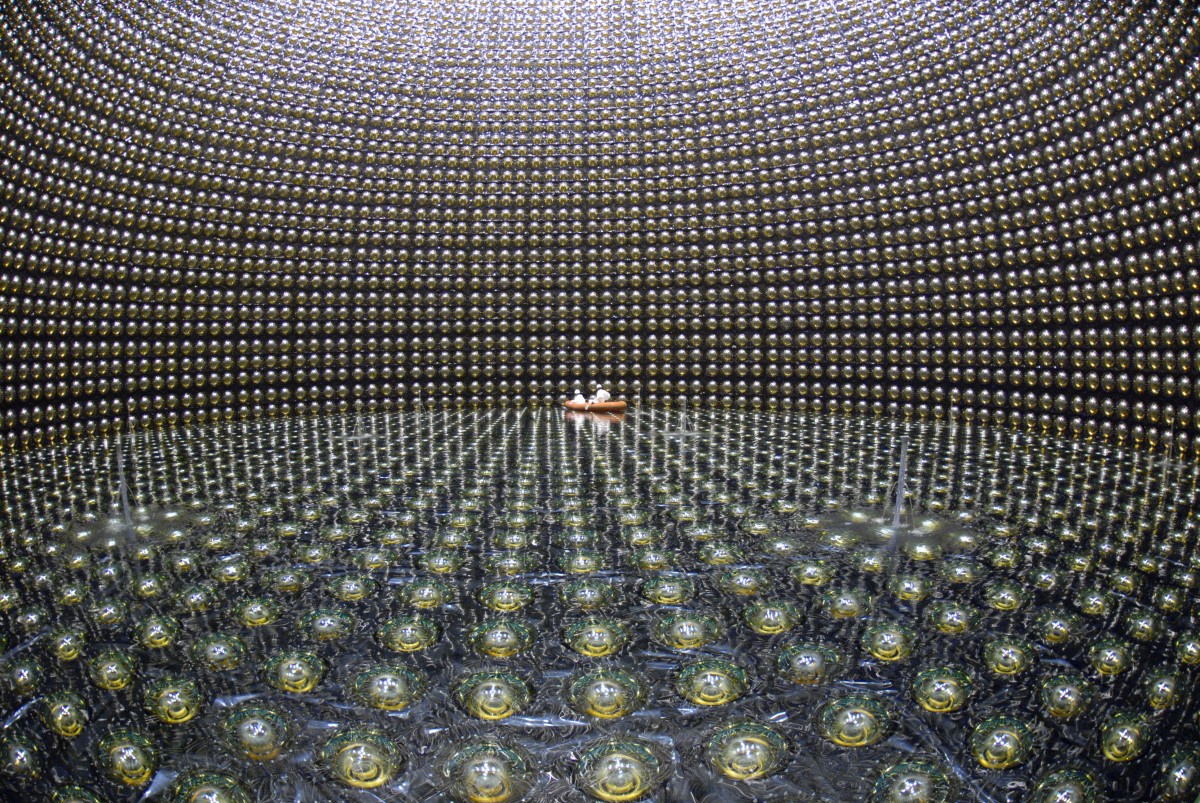 SINET3 is currently facilitating neutrino research at the Kamioka Observatory, which is run by the University of Tokyo’s Institute for Cosmic Ray Research (ICRR) and known for its Super-Kamiokande neutrino detector. We spoke with two of the Observatory’s staff, Associate Professor Yasuo Takeuchi and Project Researcher Yumiko Takenaga (in charge of public relations), and asked them about the importance of networks in cutting-edge physics research.
(Interview date: June 23, 2008; updated January 18, 2010)

Neutrino research has gained wide attention since Professor Emeritus Masatoshi Koshiba was awarded the Nobel Prize,
but can you remind us, first of all, what is the Kamioka Observatory and what is the purpose of the research done here?

Takenaga: The Observatory is a national joint-use research facility. In a mine drift 1,000 meters underground, it houses Japan’s largest precision physics experiment site, which is also one of the leading such sites in the world. What we mainly do here is investigate the basic properties of particles and the origins of the universe by means of neutrino observations and proton decay searches. Because the mine drift allows low-background observations, it is also used in geophysics research and in R&D for gravity wave detection.

Our neutrino detector, the Super-Kamiokande, started operation in April 1996 and has since yielded many results, including the discoveries of neutrino mass (1998) and solar neutrino oscillation (2001). In 2009, we commenced the T2K experiment, which involves firing a neutrino beam from J-PARC in Tokai-mura, Ibaraki Prefecture, to the Super-Kamiokande. In 2010, we are also due to start observations with the low-background XMASS detector for purposes such as cosmic dark matter searches.

How do you utilize SINET?

Takeuchi: Besides those of us involved in the Super-Kamiokande experiments, various university research groups work at the Observatory and have equipment here. SINET serves as an important network infrastructure for these research groups and institutions.

To take our own group as an example, the ICRR has its headquarters at the University of Tokyo’s Kashiwa Campus, and so we have used SINET3’s L3VPN service to create a VPN between Kashiwa and Kamioka. In addition to ICRR staff, collaborative researchers in Japan and abroad also use this VPN to access the observation data obtained at the Observatory. Apart from its use in the actual research, SINET is also employed for general purposes including e-mail, Web access, and IP videoconferencing.

Can you tell us how your network environment evolved over time and how you came to introduce SINET?

Takeuchi: Kamioka and the ICRR headquarters used to be connected by a private circuit, but this caused us headaches in terms of both speed and stability. We started out with 2400 bps analog modems and kept upgrading to the fastest network service available, such as ISDN 64/128 Kbps, then ATM 2 Mbps. But the data volume was just too large for the networks. At times, we even resorted to sending tapes by parcel courier.

Later, when Super SINET came as far as the National Institute for Fusion Science (one of the National Institutes of Natural Sciences) in Toki, Gifu Prefecture, we arranged to be connected, and that brought us up to 100 Mbps. Then in 2006 we had SINET establish a node here, giving us the 1 Gbps we have now. We are grateful to everyone involved in the High-Energy Physics Network in Japan (HEPnet-J) for all their cooperation in setting up the node.

So you kept on improving the data transmission environment.
Was that because a faster network speed has a major impact on your research?

Takeuchi: Yes, indeed. For instance, in the old days, one problem was that it was difficult to do analyses without coming here to Kamioka. Even just to graph analysis results for comparison, if you were working remotely you had to wait up to 10 seconds after executing each command, which was hardly conducive to efficiency. But students who had classes to attend couldn’t spend all their time in Kamioka. With a faster network, analysis can be handled even from remote locations. This is also a big advantage for researchers accessing our data from other institutions in Japan and overseas.

Takenaga: I was at Kashiwa when I was a student, and there’s certainly been an improvement in the environment there since my time. We didn’t have to wait a whole 10 seconds [laughter], but there was still a noticeable time lag. These days, even in Kashiwa you get almost as fast a response as you do in Kamioka. Since it runs so smoothly now, I’d like to see more students make the most of this environment and get involved in the Kamioka experiments.

The fact that it has become easier to do analysis work is a major advantage, then?

Takeuchi: It’s not the only one. Another big advantage is that our IP videoconferences now run smoothly. Here in Kamioka, partly because we’re far away from our colleagues, we hold frequent IP videoconferences to organize our research. The Observatory staff alone hold, on average, two or three meetings of this kind every day. And not only with colleagues in Japan; the meetings often include researchers in the U.S. or Europe. In doing international joint research, it’s very important to be able to talk face-to-face with colleagues around the world. It enables us to exchange the latest information directly and engage in discussions based on a good grasp of one another’s work. It’s great that researchers in Japan, the U.S., and Europe can pursue research together in this way.

How do you rate the SINET service?

Takeuchi: We’re very satisfied with its speed and stability. Super-Kamiokande conducts neutrino observations nonstop, 24 hours a day, 365 days a year; therefore it is extremely important to have practically no downtime. Because if the network goes down, people off-site have no idea what’s happening with the detector. We haven’t had any trouble with SINET since we introduced it.

Lastly, please tell us about your future research plans.

Takeuchi: In 2010, we have plans for the T2K experiment and the XMASS experiments that I mentioned earlier. We want to continue to lead the world in the astroparticle field.

In particular, in the T2K experiment, we will use the SINET3 service to create a new L2VPN between Tokai-mura and Kamioka. We need this in order to obtain, by GPS, the exact time that the neutrino beam is fired and to transmit the data in real time to Kamioka by L2VPN. This will enable us to obtain observation data with higher precision.

Thus, the network has become an essential part of our ongoing research program, and we trust that SINET will continue to provide a network environment with outstanding speed, reliability, and stability in the future.