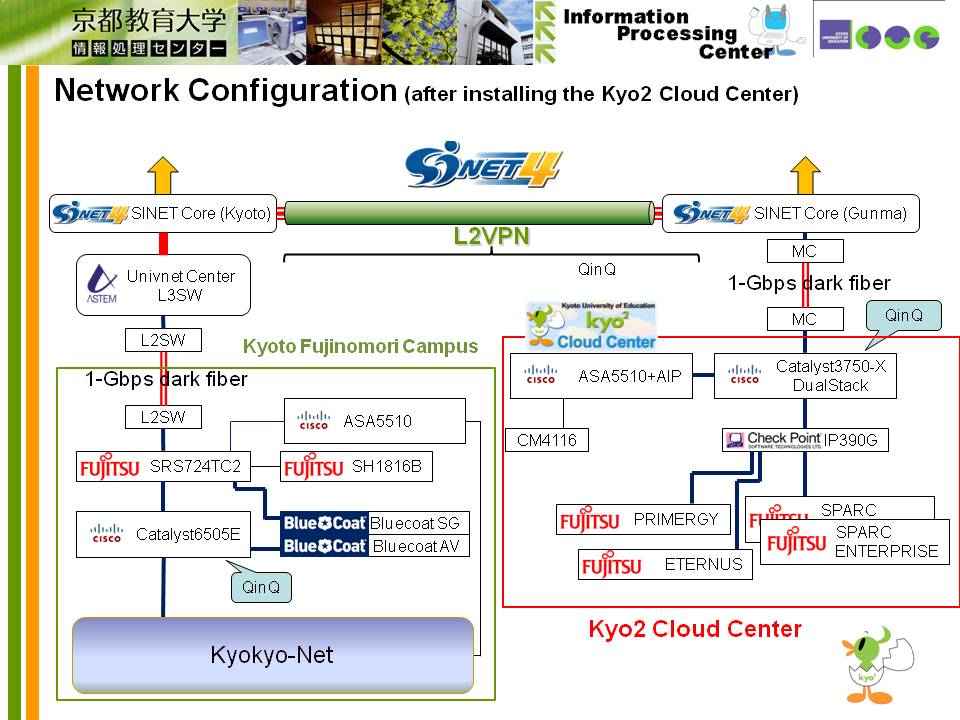 First of all, can you tell us briefly about Kyoto University of Education, and explain the functions of the Information Processing Center?

Tada： Our university is a single-department university dedicated to teacher training. Its forerunner is the Kyoto Prefectural Normal School, established in 1876. In the more than 135 years since its founding, it has been nurturing competent human resources engaged in school education as well as in social and lifelong education.
The university has many different affiliated facilities and centers. The Information Processing Center (IPC) is solely responsible for the management and operation of the IT infrastructure for education and research. At the moment, nearly 120 client computers and about 50 servers are in operation. Our shortage of staff is a headache [laughs], but we are striving to minimize our workload through efficient operation and management. We are also working hard to ensure compliance with our privacy policy, given that these days it is imperative to strengthen information security.

You are taking some advanced initiatives, including server virtualization.

Tada: In the past, each department had its own physical servers, but not all teaching personnel were strong enough in information technology, so some servers were not being managed properly. As damage caused by computer viruses and unauthorized access has emerged as a social issue, it is by no means desirable to leave any server with security issues in operation. We therefore considered integrating the server infrastructure into a virtual environment under IPC control so that users could concentrate on utilizing the content.

Akiyama： Another purpose was to improve the stability of services. The number of servers in operation within our university has recently increased. An increase in physical devices means a higher rate of system failure. In this respect, server virtualization helps minimize the impact of hardware failure. It has another advantage in that it enables us to quickly provide an environment upon a users’request.

You have also recently moved your core service servers into the cloud.
What led you to do this?

Tada: The university has been renovating the campus to enhance its quake resistance since 2008. Meanwhile, power failures caused by the renovation work happened frequently, and forced the systems offline at times. Now, e-mail and web services are a key infrastructure, essential to the activities of teaching staff and students. We received a considerable number of complaints, even when these services were only down temporarily. At IPC we considered introducing private power generation systems and other measures, but these were too costly for their expected effect. At the time, I recalled hearing about a service to connect with commercial data centers in a SINET4 briefing session. If our users could connect to servers in outside facilities via SINET, it would resolve our problem about systems shutdowns caused by power failures, and pave the way for the integrated operation of servers and networks within the university.

Akiyama: If we built a cloud computing environment by using outside data centers, the network cost would be the biggest issue. We could possibly manage to finance the servers and network devices, but the network cost would be far beyond our financial capacity. These days, business continuity planning (BCP) is also a major challenge for universities. Intended to increase security, using a remote center would increase our network costs. On the other hand, using SINET for networking between the university and the data center freed us from the network cost problem. For us, a SINET connection to commercial data centers was a very timely helping hand.

After the Great East Japan Earthquake, there was increasing momentum to use the university’s cloud service for BCP.

Tada: Originally, we switched over to cloud computing when we were tackling the power failure issue on campus. Just after the Great East Japan Earthquake, e-mail, the Web, SNS, and other services were playing a greater role than conventional telephones as a means of gathering and distributing information. These examples renewed my awareness of the importance of keeping the intra-university network online even in the event of a large-scale disaster. Like many others, our university faces the huge challenge of preparing for a possible Tokai or Tonankai earthquake. Now we can effectively use the newly built kyo2 Cloud Center.

How is the kyo2 Cloud Center run right now?

Akiyama: In addition to e-mail servers, Web servers, and other operational servers, anti-spam servers, DNS servers, and other Internet-related servers are located at a data center at least 350 kilometers away from the university. These servers are by no means just for backup purposes in the event of disaster. They are used for day-to-day operations. Given that we have spent a fair amount to install the system, and the power supply and other facilities are more reliable at the data center, we normally use the systems at the data center as our main systems.

The data center is located a long way from the campus.
Are there any issues, such as with response time?

Akiyama: If you execute a ping command, you may discover somewhat frequent delays, but this doesn’t pose a problem for daily e-mail and Web services. SINET has a very fast and stable network, and has caused no practical problems. I would guess that many of the users at the university are completely unaware that our servers have been moved to a data center 350 kilometers away [laughs]. We conduct remote backups of the file servers between the university and the data center, and these operations are done without any problems. When we were building the cloud center, I had a few problems with VLAN settings, but the SINET Promotion Office made it easy for us to figure out the problem.

What do you think of the results of the project?

Tada: Among the outcomes, the most significant result is that an environment has been created in which e-mail and Web services won’t be interrupted even in the event of a major disaster. Power failures no longer cause problems for university users. The university’s website can offer information to outsiders on a 24/7 basis. Transferring our servers to the data center has enabled us to conserve energy, as it has led to less power consumption in the on-campus server room and allowed us to change the air-conditioning temperature. In the future, we will make active use of the cloud environment as infrastructure to offer new services on campus. We hope we can provide services that bring greater convenience to teaching personnel and students while enabling them to avoid problems with information and communication technologies.