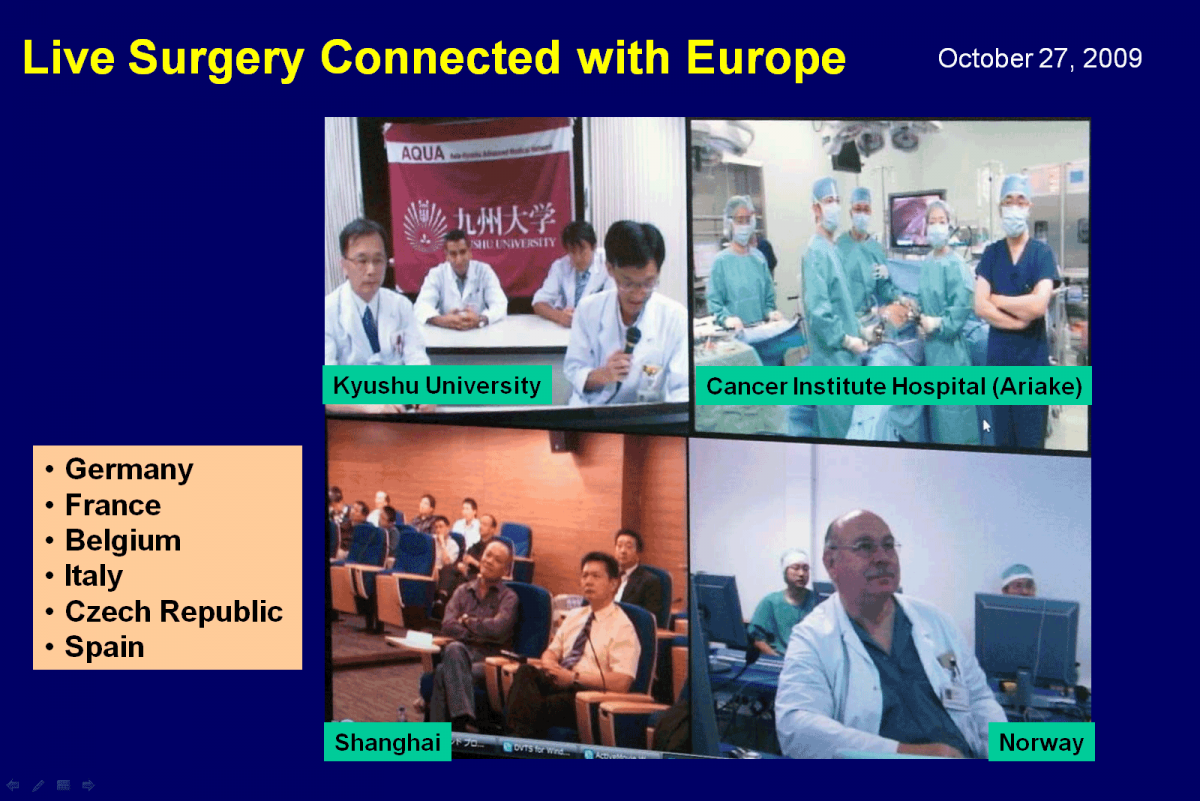 You belong to the Telemedicine Development Center of Asia (“TEMDEC,” hereafter), where you are engaged in the promotion of international telemedicine. Please tell us about what motivated you.

Shimizu: My original motivation dates back to 2002. The year is best remembered as when Japan and Korea hosted the FIFA World Cup, but in fact, another big event also took place in 2002. An undersea fiber optic cable was laid between Busan and Fukuoka, opening a high-speed internet connection. To accelerate international exchanges using the connection, Kyushu University formed a consortium known as the GENKAI Project in conjunction with industry, government and academia in Japan and South Korea. In the field of medicine, which concerns us, a project known as the Asia-Kyushu Advanced Medical Network (AQUA) was also launched, beginning an initiative aimed at international telemedicine. At the time, AQUA’s prominent characteristic was as a gathering of volunteers, but later on in 2008, AQUA was established in the current center as an official organization. In line with this, its name was changed to TEMDEC.

Please tell us about the necessity and importance of international telemedicine.

Shimizu: The word telemedicine covers a wide range of fields, but our main focus is on education for doctors. The Department of Endoscopic Diagnostics and Therapeutics to which I belong has made significant advances in the world of endoscopics over the last couple of decades. Naturally, there is also a strong need among doctors to learn the latest endoscopic procedures. However, directly touring the hospitals that conduct advanced medical care is time-consuming not to mention costly. In particular, since Asia is the target of our activities, it is quite difficult for doctors from countries such as China and South Korea to come to Japan.
Given this, we have set our sights on international telemedicine through high-speed networks and video distribution. When international telemedicine is used, it is possible to see how the latest procedures take place without having to go to the trouble of traveling to the actual location. Moreover, while there is a limit on the number of people who can observe procedures inside operating room, any number of people can observe simultaneously if telemedicine is used. In this way, telemedicine is expected to have an immense effect in the widespread dissemination of cutting-edge endoscopic procedures.

Are there requirements unique to the field of endoscopy when performing telemedicine?

Shimizu: The requirements for network quality and high speed are quite high. For example, in the United States, a medical service where CT and MRI images are sent to India, interpreted by doctors locally and the results sent back the next morning has been put to practical use. However, since this case deals with still images, the volume of data is comparatively small and real-time connections are not required. On the other hand, for what we are trying to do, as well as streaming live video of a surgery in progress, the quality of the images has to be high. If thin membranes and small blood vessels can’t be seen clearly, the surgeons can’t get anything out of watching. With this in mind, we use DVTS technology for the delivery of video and stream high-quality video data in its original, uncompressed form. In addition, for our network we use the SINET service to secure the necessary quality and bandwidth.

Did you face any challenges on the technology side?

Okamura: The DVTS data rate can be as high as 30 Mbps, but since we are using SINET for the trunk line portion, we’ve encountered few problems. However, the internal network environments of the universities and hospitals to which we connect are not always adequately equipped, and there are some cases where this has caused trouble. For example, even if we have secured 1 Gbps of bandwidth across the trunk line portion, the university or hospital network may run at 10 Mbps, have low switching performance, or have communication settings set to half-duplex. Even under those conditions, since email and the internet can be used as normal, the other party may not have regarded those things as much of a problem. Be that as it may, we realized that we couldn’t achieve end-to-end communications at 30 Mbps with things as they were, so for about the first six months from when we began experiments, we focused on things such as replacing the network equipment that was causing the slowdowns and tuning the network.

At the moment, how often is telemedicine being implemented?

Shimizu: In terms of applications there are two types, namely live demonstrations of actual procedures, and conferences. Combined, the number is perhaps between 40 and 50 a year. The number for conferences is comparatively higher, but live procedures happen about once a month. Incidentally, in the former example, live video of a surgery being performed at Kyushu University Hospital was delivered to a workshop in Hong Kong in 2008 supported by the World Organization for Digestive Endoscopy. Also, in regularly held early-stage gastric cancer teleconferences, we hold sessions where materials and endoscopic images are shown at Kyushu University Hospital and questions are fielded from Thailand, Vietnam and China. These kind of multipoint connections serve to enliven things when discussions are held. We currently work with 26 countries and 126 organizations in the implementation of live surgeries and conferences.

Is the system ever utilized for medical students?

Shimizu: Yes, it is. Each year, we hold classes for second-year medical students to convey the appeal of medicine, and we use this international telemedicine system to have students observe an actual procedure taking place. Specifically, we show the students the scenes of a Korean doctor performing a procedure live, and afterwards we have the attending doctor and local Korean medical students engage in an English-based question and answer session. There are three things we want to convey here. The first is about the new medical technology of endoscopic procedures, the second is that the practical utilization of telemedicine has already come this far, and the third is that English is also important (laughs). This class attracts a high level of interest from students, and the students participate with great enthusiasm.

When it comes to implementing video delivery between multiple countries, it seems that things like delay might be problematic.

Okamura: Since Kyushu is not that geographically distant from China and South Korea, there are few cases where delay has been a problem. As the distance is also short in terms of the network, time lag is virtually non-existent. However, expertise is required for other operational aspects. For example, an international teleconference was conducted at the International Fetal Medicine & Surgery Society (IFMSS) Conference held in 2010, and despite securing 100 Mbps bandwidth through the SINET L1 On-demand service, the video during tests was not smooth. Generally speaking, DVTS runs at 30 Mbps so that bandwidth would seem adequate, but looking at the peak bandwidth, it sometimes exceeds 100 Mbps. In response, we had the bandwidth changed to 1 Gbps on short notice and managed to avoid further problems. We were grateful that the L1 On-demand service allowed bandwidth changes to be carried out flexibly.

In what ways do you intend to develop telemedicine in the future?

Shimizu: First, on the point of educating doctors, we’d like to expand not only in the current Asia region but to North America, Latin America, Europe, Africa and other regions as well. The need for endoscopic procedures is a global one, so I hope that we can expand these activities on a more global scale. Another important initiative is the application of telediagnosis for patients. Since there are also resolutions in sight for what have to date been outstanding legal issues, I hope we can make steady progress over the next five years or so. For our part, we’ll be glad if we’re able to contribute to the development of medical care through these activities.