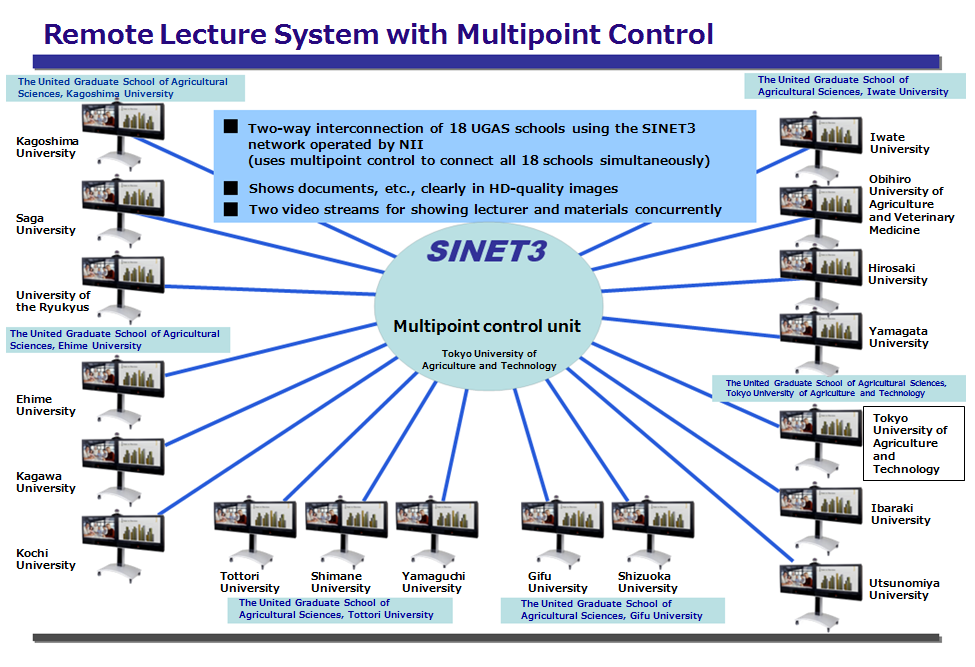 The Information Media Center (IMC) of Tokyo University of Agriculture and Technology since February 2009 has been operating a remote lecture system linking 18 national universities in Japan that are part of the United Graduate Schools of Agricultural Sciences. Before the system went into operation, we asked Associate Professor Yoichi Hagiwara and Assistant Professor Takeshi Sakurada of the IMC to give us an overview of the system and talk about its aims.
(Interview date: July 22, 2008)

First of all, please tell us how Tokyo University of Agriculture and Technology is working to make greater use of information technology.

Hagiwara: As part of our learning environment, we now have three PC classrooms each at our campuses in Koganei and Fuchu, and have installed PCs in the libraries for practice use. Altogether there are around 400 PCs operating in the school.

We also introduced wireless LANs in our school rather early on and have more than 150 access points deployed in the school. When the weather allows, you can often see students enjoying use of the network while sitting on benches amid the lush green setting of our campuses. Wireless LANs can be used even in our field research facilities, which we call field museums, in places like Chichibu, Tama Hills, and Lake Tsukui. And thanks to our standard authentication platform, students can log onto the system and network using the same ID and password whether at the Koganei campus, Fuchu campus, or any of the field museums.

It sounds like you have truly realized a ubiquitous ICT environment.

Sakurada: There has always been a lot of student movement between the Koganei and Fuchu campuses of our school for classes and club activity and so on, so it was important for us to create a network infrastructure that can be used seamlessly.

Another major feature of this school is our emphasis on tackling environmental issues. For example, when one of our clubs dealing with the environment proposed that we reduce paper use, we introduced digital multifunction copiers in place of the conventional type. Besides making efforts not to print out or copy needlessly, we allow the scanner function on these copiers to be used for free, so that people can convert documents to PDF format and store them on USB memory. One result is that when clipping articles from newspapers or other sources, the information can be kept not as paper but as digital data.

As a school combining agriculture and technology, it makes sense that you are emphasizing ecology also from an IT standpoint.
Getting to our main topic, reportedly you have launched a project for building a remote lecture system that will connect each of the national United Graduate Schools of Agricultural Sciences (UGAS).
Can you give us some background to this project?

Hagiwara: Remote lectures are held on a rotating basis at the 18 schools making up the UGAS. They take place twice a year, in June and November, for two days each, as seminars on the topics chosen each time. Up to now the infrastructure used for these remote lectures has been the SCS (Space Collaboration System) satellite communication system operated by the National Institute of Multimedia Education (NIME).

Unfortunately the SCS has been in operation for 12 years and is starting to show its age. Maintaining the ground stations has become increasingly expensive, and it is hard to obtain replacement parts. In fact, some universities are no longer able to take part in the remote lectures because of ground station failure. As agricultural reform grows in importance, we certainly cannot afford to let infrastructure problems interfere with UGAS activities.

That’s why at the IMC we decided to test the feasibility of using a terrestrial network for video delivery and Q&A, as a solution to this problem. Since the technology was demonstrated to be fully practical, we went ahead and launched this project. Since then, it was announced that the SCS will be shut down, so each of the universities has high expectations for this new system.

What are your aims in the design of the new system?

Sakurada: The first is to make it a system that can be used five years from now. There are plenty of systems that can distribute video. Since it is to be used for lectures, having it become obsolete in a short time would be a problem. So for this system we decided to support high definition quality. Lately many different videoconferencing systems and video delivery solutions are being installed and used, but it is still unusual for an HD-quality video delivery system to be introduced on a nationwide basis.

A second emphasis is on making it an easy-to-use system. With some videoconferencing systems, for example, the remote control operation is complicated, making the system difficult to use without prior training. With the SCS, you had to reserve the links days in advance in order to use the network. Our aim with the new system is to resolve issues like these. We want it to be a system that can be used intuitively even without being familiar with IT. It should be available immediately when you want to use it. And it should be possible to reserve a time and have it start up automatically at that time, ready for use.

So it should be quite convenient to use, then.

Hagiwara: We have paid considerable attention to usage aspects. The new system uses touch panels, for example. If the lecture looks like it is going to be longer than planned, you just touch the “Time extension” button on the panel. With some remote lecture systems, the network connection is cut off when the time is up even if it is in the middle of the lecture; but with the new system we won’t have to worry about that. And since it doesn’t use large-scale equipment like satellite ground stations, it will use only a fraction of the electricity of the old system. We expect it to be highly beneficial from the standpoint of reducing environmental impact.

The new system adopts SINET3 as the network.
What was the reason for this choice?

Sakurada: Basically the objective of this project is to connect the 18 UGAS schools, but we are also looking ahead farther into the future. For example, there are likely to be cases where individual universities will want to use the system together with their sister schools or with other schools in the same part of Japan. If we adopted a network service that is not very open, this would present a high hurdle to new participation by other schools in such cases. In that respect, SINET3 has the advantage of being widely used by national universities throughout Japan as well as enjoying NII support.

The speed and stability of the network are also very important for carrying HD-quality images, and in this regard we can use SINET3 with assurance. So we decided SINET3 would be the best network for the new system.

You must be excited about the pending start of operation in February 2009.
What are your expectations as you look ahead to the future?

Hagiwara: I would like to see the system used in the future for lecture exchanges and conferences with overseas universities and research institutes. In the agricultural field, tie-ups with Southeast Asia, South America, and Africa are especially important, so it would be wonderful if the system could contribute to deepening exchange with those areas.

Sakurada: Other universities in Japan have also asked us about interconnection with the remote video delivery systems they are introducing in their schools. Once the system goes into full operation, we would like to explore further these and other possibilities for expanding the network.