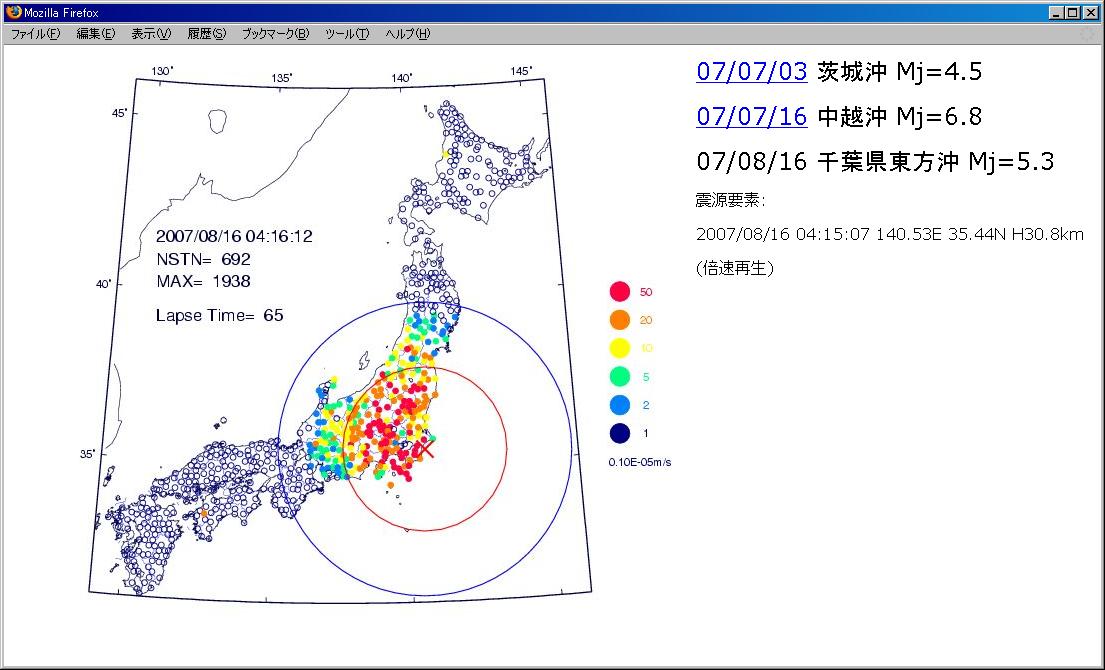 JDXnet, the Japan Data Exchange Network for earthquake observation data, is a joint project of the University of Tokyo Earthquake Research Institute with other national universities and institutions including the Japan Meteorological Agency (JMA), the National Research Institute for Earth Science and Disaster Prevention (NIED), and the Japan Agency for Marine-Earth Science and Technology (JAMSTEC). We talked with Professor Kiyoshi Takano* and Assistant Professor Hiroshi Tsuruoka, both of the Earthquake Information Center in the University of Tokyo Earthquake Research Institute, about the significance of this network and the role of SINET.

*Currently serves also as a Professor in the Center for Integrated Disaster Information Research (CIDIR) Interfaculty Initiative in Information Studies of the University of Tokyo.

First of all, please tell us about the University of Tokyo Earthquake Research Institute.

Takano: Our institute carries out comprehensive research and education activities in seismology and volcanology, for the purposes of better understanding earthquakes and volcanic eruptions and reducing disasters caused by these phenomena. Today it consists of four research divisions and five centers as well as various administrative offices and departments supporting the research activities. The Earthquake Information Center plays a central role in the nationwide university information networks for earthquake prediction research. Our specific activities include collecting and providing earthquake observation data, building and operating a data exchange network and nationwide shared computer system, and conducting IT-driven research on disaster prevention information systems.

Earthquake observation data exchange is something you have been doing for quite some time, right?

Takano: Yes, that’s right. Let me give a brief summary of its historical background. In the past, individual universities as well as the JMA and NIED had their own independent observation networks. Efforts started in the early 1990s to share data provided from these networks. Back in the days when there was none of the currently used network infrastructure, data were exchanged between nearby universities over 9600 bps leased lines. In 1993 we adopted TCP/IP technology and began sharing data using 64 Kbps leased lines and SINET. Then in 1997, a telemetering system using satellites started operation, shared by nine universities. This gave impetus to data sharing and joint research nationwide.

Then after that you built the current JDXnet.

Takano: Yes, we did. Some 10 years after constructing the aforementioned satellite-based system, obsolescence and other problems became noticeable. Meanwhile, terrestrial network infrastructure had by that time improved dramatically, so we began looking around for alternatives. Just at that time we learned that the JGN2 test bed was available, and began building a wide-area L2 network for exchanging earthquake observation data.

What was the reason for adopting the L2VPN service?

Takano: In our research, we exchange data with many universities and institutions. If this is done via one-on-one links with each organization, the setup and administration would be too complex. So we decided to use L2 broadcasting as an alternative. By having each university and institution broadcast its data over a wide-area L2 network, all the data could be exchanged. We thought about going to L3 multicasting in case this didn’t work out, but fortunately our tests with L2 broadcasting were successful and so we began operation in this fashion.

What requirements did you have for the network?

Tsuruoka: This network serves as infrastructure for earthquake research all over Japan. It is used to send observation data round the clock, 365 days a year. That’s why it’s extremely important that the network never stops. If the data flow were to stop, we wouldn’t be able to perform analysis later on. I should note that the earthquake data distribution servers and related equipment installed in each organization are thoroughly tested in our Center before they are put into operation.

How are the observation data exchanged over JDXnet put to use?

Takano: Currently JDXnet carries earthquake data from approximately 1,300 observation points nationwide. These data can be utilized in real time for research at each of the connected universities and institutions. We also archive data which are made available on the Web sites of nine universities in Japan for wider use by researchers, who may want to analyze these data but do not necessarily have to obtain them in real time. For example, if someone wants to analyze data associated with the Iwate-Miyagi Nairiku earthquake of June 14, 2008, they can go to the Tohoku University Web site to obtain the data and study them. The general public can also use the data at the NIED Hi-net Web site, and JMA makes use of earthquake data from all the JDXnet organizations when determining the source location and magnitude of earthquakes. These are just some of the many different ways the data are used.

Tsuruoka: For example, I am conducting research on determining the mechanism of earthquakes in real time using JDXnet. Earthquakes are caused by various mechanisms, such as the reverse fault, normal fault, and lateral fault types. This research aims at determining which mechanism caused a quake as quickly as possible. Of course off-line data can be used for mechanism determination, but that requires searching for and collecting the necessary data each time, which is a time-consuming process. On the other hand obtaining observation data in real time enables the mechanism to be determined promptly and efficiently. I believe that infrastructure like JDXnet raises the awareness and motivation of researchers.

And now you have newly introduced the SINET3 L2VPN service.

Takano: As Dr. Tsuruoka noted earlier, the network has to be extremely reliable. Looking at the SINET3 backbone network diagram, we felt that we could count on high reliability and therefore decided to build the JDXnet data exchange network using SINET3 L2VPN service. We also chose to use JGN2 for communication path redundancy, so that in case some kind of fault occurs on one path, data can continue flowing on the other without stopping.

There are also some universities that want to make use of the observation data in real time even though they do not have their own observation point. We will be able to provide them with data via SINET3. Being able to realize this kind of environment will be highly significant for energizing earthquake research in Japan.

The new network should play a major role in future earthquake research.

Tsuruoka: Right now JDXnet is being used only for observation data, but in the future we hope to expand its use to other kinds of data sets. For example, we would like to use it to carry data created by processing raw seismic data, or information of various kinds derived from the processed data. If we can do that, we would be able to realize new and different ways of utilizing this information.

Takano: I have been studying means of exchanging earthquake observation data for many years, but I have the feeling that with the realization of this kind of environment, we are opening up the way for many new possibilities. Of course the further development of such means requires a network not only of data but also of people. So I would like to continue making efforts to build up a network of researchers.