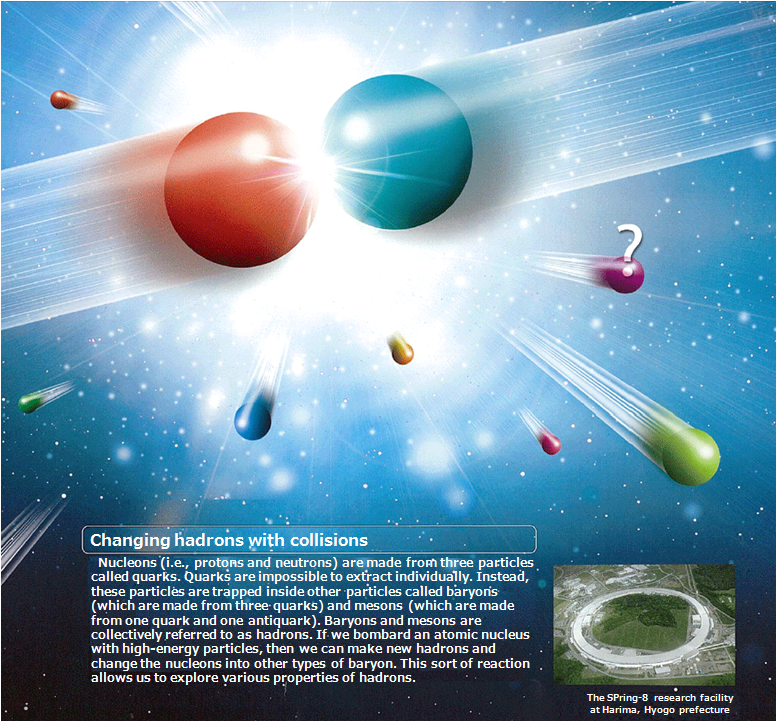 At the Experimental Nuclear Physics Division of Osaka University’s Research Center for Nuclear Physics (RCNP), the LEPS (Laser Electron Photon beamline at SPring-8) project is using a laser-electron-photon beamline to research the properties of hadrons. We spoke to Professor Takashi Nakano and associate professor Tomoaki Hotta of the RCNP about their work and the role played by SINET.
(Date of interview: April 23, 2010)

First of all, can you describe what goes on in the RCNP and the Experimental Nuclear Physics Division?

Nakano: Although the RCNP was established on the campus of Osaka University, it is also Japan’s only collaborative research organization in the field of nuclear physics and its doors are open to nuclear physicists both from Japan and from abroad. As a result, we are involved in collaborations and joint studies with nuclear physics researchers from many other universities and organizations besides Osaka University. The Center has other research divisions apart from the Experimental Nuclear Physics Division where we are based. These include the Theoretical Nuclear Physics Division, the Accelerator Research Division and the Cosmonuclear Physics Division. You might not think it, but nuclear physics is actually a very wide research field. In our group we are working on an experimental study of hadron physics. In other words, we’re studying how quarks behave inside protons and neutrons.

Your experiments involve using a laser-electron-photon beamline. What is that?

Nakano: To study small particles like quarks, you have to use light with a very short wavelength. The wavelength and energy of light have an inverse relationship, so to achieve shorter wavelengths we have to use higher energies. A laser-electron-photon beamline helps us to achieve this. When a laser beam encounters an accelerated electron, the light is given a huge kick in the opposite direction. The effect is like a steel ball bashing into a ping pong ball at breakneck speed. This makes it possible to amplify the energy of the light many millions of times over.

At this center, the LEPS laser-electron-photon beamline used for these experiments is situated at the SPring-8 large synchrotron radiation facility in the Harima Science Garden City in Hyogo prefecture. The electron beam traveling around the SPring-8 storage ring has energy of 8 GeV, which allows us to convert laser light with a wavelength of 350 nm into a powerful light beam with energy of 2.4 GeV. Since the wavelength of this light beam is just 0.5 femtometers, which is less than the width of a proton, it enables us to study the behavior of quarks.

How do you go about performing these experiments?

Nakano: When the LEPS photon beam strikes a target such as a proton, new particles with very short lifetimes are produced. In our experiments, we use detectors to capture these particles and study their properties and behavior. Of course, we’re never quite sure what particles we’re going to end up with until we actually run the experiments (laughs). So it’s absolutely essential that we don’t overlook anything that happens during these experiments. But working with SPring-8 is just one phase of our experimental study. After that, we have to spend a long time analyzing the data. When new researchers join our team, they will sometimes want to analyze data from previous experiments from their own viewpoint, so it’s important for us to be able to acquire large amounts of experimental data and store it for future reference.

Can you describe the system/network environment that supports the LEPS project?

Hotta: In the SPring-8 facility, data collected by the detector is recorded and placed in local storage and a computer for primary storage. The actual analysis work is done using an analysis computer and a mass storage system back at the RCNP. To transfer the data from SPring-8 to the RCNP, we use a SINET3 layer 3 VPN service.

Previously, there wasn’t enough bandwidth on the SPring-8 side, so it was sometimes difficult to transmit large quantities of data. But we’ve had no such difficulties since the Super SINET node was installed in 2005. Currently, SPring-8 is generating 200 GB of data every day, but now that we have a bandwidth of about 600 Mbps at our disposal, the data can be transferred very smoothly.

Also, the RCNP and SPring-8 networks used to be run separately, but the VPN made it possible to integrate them into a single entity. This allows us to use resources seamlessly between both sites. Besides accessing data, we can also do things like send documents to the printers at SPring-8 from here without any difficulty. This has made life much easier for the researchers working on this project.

What results have you obtained so far in your research?

Nakano: One of our biggest achievements was the discovery of a new type of particle made from quarks. In quantum chromodynamics, quarks are said to be stable when they exist in a group of three primary colors or anticolors that combine to form white. But in theory there is nothing to prohibit combinations of four or more quarks. For example, white can also be obtained from four quarks by combining two colors and their corresponding anticolors, or from five quarks by combining three primary colors with a color+anticolor pair. Combinations of four or more colors had not been observed in any previous studies, but in the LEPS experiments we discovered a particle that is thought to consist of five quarks (a pentaquark). This was a very significant achievement since it is the first time anyone has managed to capture these particles, which previously only existed in theory. But these findings still haven’t been fully established, so we need to conduct more research.

Are you also working on the LEPS2 project?

Nakano: Pentaquarks are just one of the many new discoveries we’ve made in the LEPS experiments. So we decided to collect more detailed data by using a laser beam ten times more powerful than LEPS, together with upgraded detector equipment. This resulted in the LEPS2 experiments, which we are working on now. SPring-8 has a total of 62 beamlines, but in LEPS2 we plan to use just four of these in 25 m long beamlines.

Hotta: Once LEPS2 becomes fully operational, the quantity of data it produces will be in a different league altogether. Like I said, the LEPS project generates 200 GB of data per day. In LEPS2, we expect to collect 300 GB of data per second. We’ll need a bandwidth of about 3 Gbps to get this data from SPring-8 to the RCNP, so the network environment will have to be strengthened. So for this reason I eagerly anticipate the future development and support of SINET.

And we’re eagerly awaiting the start of the LEPS2 project.
Finally, what are your hopes for the future?

Nakano: Developments in network technology and IT have brought about major changes in the experimental style of atomic physics. Back when resources such as hard disks and computers were expensive and precious, researchers were obliged to ensure that their measurements were skillfully focused on the correct target. Nowadays, we can simply collect large quantities of data for analysis. We also want to accumulate as much data as possible with the LEPS and LEPS2 projects so as not to overlook the goings on in the world of quarks.